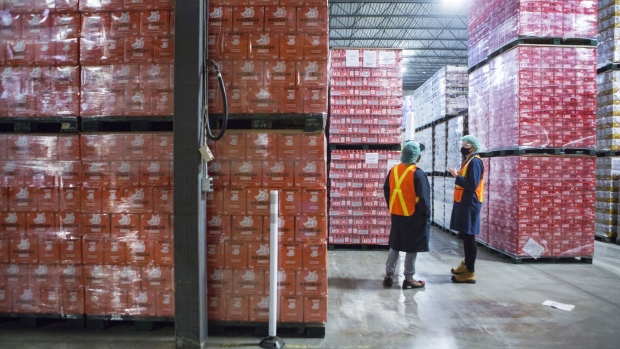 Warehouse operators across the U.S. are rushing to hire workers amid a boom in online sales, a bright spot for a labor market that faces mounting challenges.

With purchases of everything from sweatpants to toilet paper set to hit a holiday record, companies that order, pack and ship goods are moving up seasonal hiring earlier in the year and converting gig positions to full-time roles at a faster clip than before, according to employers and staffing agencies. Many are also raising wages and lowering the bar on education and experience requirements to get people in the door.

While overall employment across the U.S. is still nearly 11 million below pre-virus levels, the warehousing and storage industry is one of the few sectors where employment is actually higher than before the pandemic: 1.25 million people were on payrolls in September, about 46,000 more than in February.

That’s a welcome sign consumer spending should help support a gradual economic rebound, with e-commerce cushioning the shortfall from bricks-and-mortar retail. Online sales are expected to jump as much as 35 per cent to about US$196 billion in the coming November-January period compared with a year earlier, according to Deloitte, though economists’ forecasts for overall holiday spending are mixed.

“We’re seeing increases in demand, especially related to e-commerce and that entire supply chain,” said Richard Wahlquist, president of the American Staffing Association. While some of the hiring activity is seasonal, the higher rate of conversion to full-time work bodes well for the labor market long-term, he said.

Job postings for transportation are up 10 per cent in the third quarter, compared with 2.5 per cent last year, according to LinkUp, a job-listing and analysis firm. United Parcel Service Inc. is adding more than 100,000 seasonal workers, a slight increase from last year, after already hiring tens of thousands earlier this year. FedEx plans to hire 75,000, 27 per cent higher than last year. Amazon.com Inc. plans to open 1,000 warehouses across the country.

“People are migrating toward industries that are experiencing shortages,” such as warehousing, from the hospitality or restaurant sectors, said Michael Englund, chief economist of Action Economics LLC. “There’s going to be a permanent component to this but the question is: What does the end of this pandemic look like? Will people have permanently shifted behavior?”

For Wonolo, a jobs platform that connects about 500,000 people with mostly gig work, the holiday rush came early. Job postings have soared: in the year through August, there were nearly six times more e-commerce openings for the holidays than last year. Importantly, the average wage increased 16 per cent to US$14.18.

Shipfusion, an e-commerce startup that handles warehousing, packing and shipping needs for small and medium-sized businesses, more than doubled its fulfillment operations staff this year to 160 people, about 50 of them full-time--also double last year’s level.

The Carol Stream, Illinois-based company also recently hired a sales director and someone to lead expansion plans across the East Coast.

“We’ve definitely experienced a lot of growth,” the firm’s director of internal operations, Erin Pollock, said by phone. “As soon as Covid hit, we were experiencing the same kind of numbers as Black Friday.”

Shipping rates and delivery delays have been the biggest impediments, she said. Air freight remains tight, and truck drivers retiring or quitting amid COVID-19 health concerns means the cost of ground delivery is also squeezing consumers and companies, with rates up about 20 per cent from 2019 nationwide.

The boom in demand is driven by a jump in orders on Amazon.com and other commerce giants, but also small businesses like Lay-n-Go, which sells fabric purses and bags that open into mats to easily find items. Founder Amy Fazackerley noticed sales picking up in July, and so far this year they’re up about 10 per cent compared to 2019, as customers found themselves spending a lot more time at home and looking to organize.

She hired a sales and marketing firm this year to help with analysis and digital advertising and, like so many other companies, finding ways to get in front of more eyeballs online.

“People are still shopping, just in a different way because of the pandemic,” said Fazackerley, whose company is based in Alexandria, Virginia. “It feels like the economy is restarting -- people want to get back to normal.”