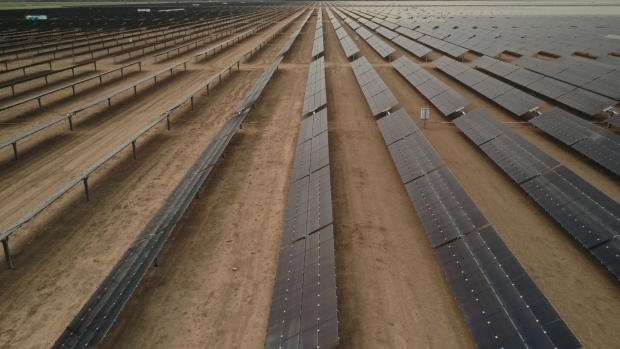 Photovoltaic panels at the Calexico Solar Farm II in this aerial photograph taken over Calexico, California, U.S. on Friday, Sept. 11, 2020. As the threat of blackouts continues to plague California, officials are pointing to battery storage as a key to preventing future power shortfalls. But the Golden State is going to need a lot more batteries to weather the next climate-driven crisis—let alone to achieve its goal of a carbon-free grid. Photographer: Bing Guan/Bloomberg , Bloomberg

(Bloomberg) -- The Biden administration is considering ways to push the global finance industry into consistently accounting for carbon dioxide emissions and green investments, according to people familiar with the matter.

The Treasury Department and U.S. regulators are in the early stages of working on measures to improve companies’ disclosure of their environmental impact, according to the people, who spoke on condition of anonymity because the discussions are private. The moves seek to address carbon leakage -- where producers move to regions with less restrictive pollution rules -- and climate-related metrics for Environmental, Social and Governance-based investing, the people said.

Part of the effort would include recommendations being crafted by the SEC for companies to report their environmental impact, according to one person.

The intent is to boost demand for assets that tackle climate change, while preventing companies from making claims that could be considered “greenwashing,” or overstating the significance of emissions reductions and sustainability efforts, the people said. They asked not to be identified because Treasury’s discussions are not public.

There are already several industry-driven initiatives to establish a set of rules for green finance. But experts warn that without strong government oversight the industry could settle on looser standards that allow firms to continue supporting carbon-intensive activities while using cheap offsets to claim they’re doing what’s needed to slow global warming.

A Treasury spokesperson declined to comment. A Securities and Exchange Commission spokesperson didn’t immediately respond to a request for comment.

The SEC announced Monday that it would solicit public comment on potential changes to policies governing climate disclosure, including whether it should set different standards for various industries and whether investors should have a say in what specific corporations have to reveal.

Gary Gensler, Biden’s nominee to lead the SEC currently awaiting Senate confirmation, would be responsible for implementing any changes to companies’ disclosure requirements.

Wall Street banks such as Citigroup Inc. and Goldman Sachs Group Inc. have pledged to achieve net-zero emissions. That requires a focus on cutting emissions first, before using offsets to neutralize any pollution that still remains. Doing so usually requires costly structural changes.

President Joe Biden is pushing for the U.S. to take more aggressive climate action. He’s expected to announce a 2030 pollution reduction goal next month that will align with efforts to keep average global temperatures from rising more than 1.5°C from pre-industrial levels, according to two people familiar with the matter.

That’s the most-ambitious target under the Paris Agreement. The U.S. government is convening a summit with the world’s top carbon emitters on April 22, with hopes of driving more ambitious emissions-reductions and climate-finance commitments.

Since taking office, Biden has sought to convince other world leaders that the U.S. is firmly back in the global fight against climate change, after it pulled back under President Donald Trump. Hashing out definitions of green financing will be a key part of discussions at international climate talks scheduled for November in Glasgow, Scotland.

The Biden administration’s green finance framework should start to take shape by June when leaders of the Group of Seven countries are due to meet in southwest England, the people said. U.K. Prime Minister Boris Johnson’s government also wants carbon leakage to be on the agenda.

“Raising ambition as we go to Glasgow is so critical,” U.S. Special Presidential Envoy for Climate John Kerry said earlier this month at CERAWeek by IHS Markit.

In Glasgow, “we will meet with the nations that met in Paris to hold the earth’s temperature hopefully to no larger than a 1.5 degrees Celsius increase,” Kerry said. “Our hope is that by keeping 1.5 degrees alive in the next 10 years, we lay the groundwork for the exciting venture of transitioning to clean energy.”

The U.S. and Europe could have an identical set of rules that determine what counts as green investment, French Finance Minister Bruno Le Maire told Kerry last week in Paris. The EU is due to propose a regulation on the so-called taxonomy next month.

U.S. Treasury Secretary Janet Yellen has said she will create a “climate hub” within Treasury to address Biden’s “whole-of-government” approach toward climate change. The hub will be overseen by a senior adviser who is expected to report directly to Yellen, one of the people said.

A Treasury climate “czar” has not been announced. Sarah Bloom Raskin, a former Federal Reserve official who served in the Treasury Department during the Obama administration, was under consideration for the post, Bloomberg News reported last month.