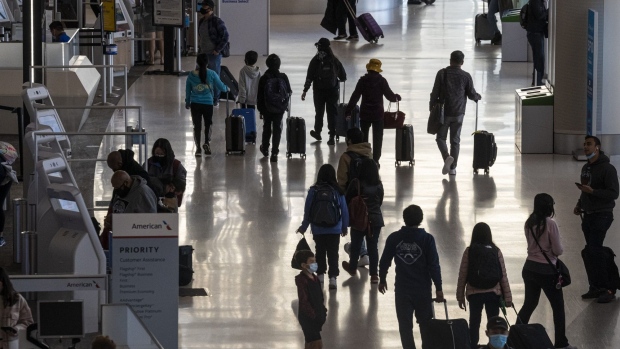 Travelers at San Francisco International Airport (SFO) in San Francisco, California, U.S., on Wednesday, Nov. 24, 2021. Air traffic for the Thanksgiving holiday is expected to approach pre-pandemic levels and travelers are likely considering their plans with some dread, given fresh memories about thousands of canceled flights. Photographer: David Paul Morris/Bloomberg , Bloomberg

American health officials spoke with their South African counterparts at midday New York time on Friday to gather medical and scientific data about the newly discovered variant, which the World Health Organization labeled a “variant of concern.”

Anthony Fauci, one of Biden’s top health advisers, said they’d use that data in deciding whether to join the European Union, the U.K. and others in restricting travel.

Biden’s advisers are meeting Friday afternoon to discuss next steps, an official familiar with the matter said, and Fauci said earlier in the day that travel measures are being considered.

It’s not clear if a U.S. travel decision will be made Friday, according to the official, who asked not to be identified discussing internal deliberations.

“You always put these things on the table but you don’t want to say you’re going to do it until you have some scientific reason to do it,” Fauci told CNN on Friday. “There’s always the possibility of doing what the U.K. has done, namely block travel from South Africa and related countries, we don’t know that. That’s certainly something you think about and get prepared to do; you’re prepared to do everything you need to do to protect the American public but you want to make sure there’s a basis for doing that, and that’s what we’re doing now.”

It’s not clear how significant a new ban on flights from southern Africa would be in itself. There are only a handful of direct flights between the U.S. and South Africa. The overall market between that region of Africa and the U.S. is also relatively small compared to domestic travel and other international destinations, such as Europe.

But airline shares tumbled the most since the early days of the Covid-19 pandemic on the news of flight bans. The Bloomberg EMEA Airlines Index sank as much as 12% and the S&P 500 Index declined the most since February.

The new travel restrictions threaten to undo progress the airline industry has had with growing domestic travel and the reopening earlier this month of U.S.-European travel. Other governments, including Hong Kong, have enacted travel restrictions from the region.

Despite raising concerns about the new strain, South Africa’s Health Minister Joe Phaahla said new travel bans imposed on the country after the discovery of a new Covid strain, particularly by the EU, were “unjustified.”

The moves “are completely against the norms and standards” advised by the World Health Organization, Phaahla said Friday during an online press conference.