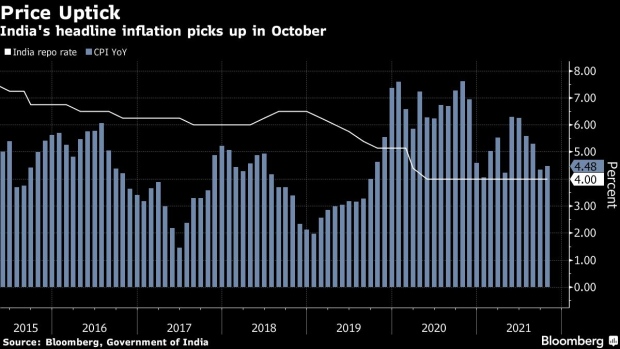 (Bloomberg) -- The winds of inflation in the U.S. strengthened further in November with consumer prices projected to show the largest annual advance in decades, keeping pressure on the Federal Reserve to deliver swifter policy tightening.

The widely followed CPI gauge probably increased 6.7% from November 2020, according to the median projection in a Bloomberg survey of economists. Compared with a month earlier, prices are seen rising 0.7%.

The surge in inflation this year reflects resilient demand, fragile transportation networks and shortages of both supplies and labor, pressures inflicted by the disruption of the pandemic that are reverberating throughout the world economy.

Fed Chair Jerome Powell has signaled that the worsening price environment is likely to encourage officials to accelerate stimulus withdrawal, an assessment that may still stand despite the smallest gain in jobs growth this year being revealed in data on Friday.

“With omicron now circulating in the U.S., presenting upside risks for inflation, and next week’s CPI release likely to show the highest inflation since 1982, we expect this jobs report will not be enough to deter the Fed from announcing a faster taper.”

The government’s report will cap a relatively quiet week for U.S. economic data. Other key releases include job openings and consumer sentiment.

Elsewhere, at least a dozen central banks are due to hold meetings, including Brazil’s, which may deliver a 150 basis-point increase, and the Bank of Canada, which is moving toward withdrawal of support next year.

The Bank of Canada is expected to keep the spotlight on inflation at a policy decision next week, as investors anticipate the start of an aggressive campaign of interest-rate hikes next year.

Officials aren’t anticipated to make any changes to policy on Wednesday. But the Canadian central bank has already ended its bond-buying stimulus program and begun hinting at an accelerated timeline for the start of rate normalization.

Recent data showing strong growth in economic activity and employment will only cement those expectations, with markets already pricing in five hikes over the next 12 months.

After ditching its yield curve control program, Australia’s central bank will announce its last policy decision of the year on Tuesday amid ongoing market bets that it’ll need to wind back its emergency stimulus settings faster than currently projected.

Bank of Japan Governor Haruhiko Kuroda will likely share his view on the unfolding risks of the omicron variant in a speech to European financiers Monday. The bank’s deputy governor talks to local business leaders on Wednesday as investors look for clues about whether the BOJ will extend its Covid aid program past March.

And in China, trade data for November is likely to remain strong on Tuesday while inflation data Thursday is set to show a light moderation in factory prices from October’s highs and a pick up in consumer costs.

Monthly data in the U.K. and the euro region will hint at those economies’ performance in the face of global supply bottlenecks but before news of the omicron variant emerged.

In Britain, gross domestic product for October is expected by economists to reveal some moderation. The data will be among the final snapshots available to Bank of England policy makers before their last decision of the year on Dec. 16.

Meanwhile in Germany, reports on industrial output and factory orders will show how logistics snarl-ups around the world impacted Europe’s biggest economy in the first month of the final quarter, with implications for the region’s overall growth numbers.

Multiple appearances by European Central Bank policy makers are also scheduled, which may attract investor attention for clues on their big stimulus decision on the same day as the BOE. Toward the end of next week, they will enter a quiet period on monetary policy.

Poland’s central bank is expected by economists to raise interest rates again as inflation hits yet another 20-year record, while officials in Serbia and Ukraine will also gather.

Hungary, Europe’s most hawkish jurisdiction, currently makes a weekly assessment as well monthly decisions. Officials there will determine whether to tighten further after a cumulative 110 basis points in rate hikes in November.

In South Africa, data on Tuesday will likely show the economy contracted in the third quarter. The central bank expects output to shrink 2.5%, partly due to civil unrest and stricter measures to curb a third wave of Covid-19.

On Wednesday, Namibia, part of a common monetary area with South Africa, may follow its neighbor’s central bank and raise its key rate by 25 basis points to safeguard the currency peg with the rand and keep attracting foreign investors.

PMI data for the UAE on Monday may show another uptick as growth rebounds faster than expected, thanks to an open-door travel policy and hosting the delayed global Expo.

Latin America’s current bout of inflation is perhaps nowhere more dramatic than in Chile: some forecasts see a November print out Tuesday of 6.7%, more than double April’s pace.

Brazil’s central bank has been clear: a second straight 150 basis-point rate increase is on tap Wednesday to push the key rate to 9.25%, with more hikes to come. Despite record tightening in 2021, policy makers will likely miss their inflation target by more than 600 basis points and don’t expect to hit it until 2023 at the earliest.

Peru’s central bank appears comfortable with a gradual tightening cycle so look for a fourth straight half-point hike to put the key rate at 2.5%.

Mexico also reports November consumer price data Thursday and forecasts put the print over 7%, more than twice the 3% target. The central bank sees 2021 inflation of about 6.8%, which would be the fastest full-year pace in two decades

Winding up the week, analysts expect that Brazil’s consumer prices accelerated for a 18th straight month in November to just under 11%. Inflation pressures in Latin America’s biggest economy remain broad-based.