EU could strike back against American tariffs

The price of Scotch, French wine, cheese and other European exports is about to go up in the U.S. after the Trump administration announced new tariffs on billions of dollars of EU products starting Oct. 18.

President Donald Trump got the go-ahead from the World Trade Organization to impose tariffs on as much as US$7.5 billion worth of European exports annually in retaliation for illegal government aid to Airbus. The award is the largest in WTO history.

However, there was relief for some firms as the U.S. removed leather goods from its original proposed list and measures on wine and spirits weren’t as severe as some expected. Shares of European luxury companies gained after a Wednesday slide on concerns about tariffs and falling sales in the key Hong Kong market. LVMH gained as much as 2.4 per cent, Kering SA ticked up as much as 1.7 per cent, and Hermes International by 1.4 per cent in European trading on Thursday.

Washington has requested the WTO meet Oct. 14 to formally authorize the tariffs, and the duties would then take effect Oct. 18, according to the U.S. Trade Representative’s Office. The goal of the Trump administration in imposing retaliatory duties is to persuade the European Union to reach a negotiated settlement, according to a senior U.S. trade official who briefed reporters on Wednesday.

The U.S. plan includes a 10 per cent tariff on large civil aircraft from France, Germany, Spain and the U.K. It will also slap 25 per cent levies on a range of other items including Irish and Scotch whiskeys, wine, olives and cheese, as well as certain pork products, butter and yogurt from various European nations.

The exclusion of leather goods spares luxury labels such as Givenchy and Louis Vuitton. Though wine and spirits produced by LVMH and Diageo PLC are among those affected by the levies, the 25% tariff was lower than analysts worst case scenario. Remy Cointreau SA and Pernod Ricard SA dodged a bullet with the omission of cognac and champagne. Overall, the U.S. tariff list “represents a light touch and we would expect positive reaction for European spirits companies,” Jefferies analyst Edward Mundy wrote in a note.

The new U.S. list does spare some Airbus parts including sections of fuselage that are used to assemble A320s for American buyers at a plant in Mobile, Alabama. State officials in Alabama had lobbied for parts used by the plant to be spared.

“Finally, after 15 years of litigation, the WTO has confirmed that the United States is entitled to impose countermeasures in response to the EU’s illegal subsidies,” U.S. Trade Representative Robert Lighthizer said. “We expect to enter into negotiations with the European Union aimed at resolving this issue in a way that will benefit American workers.”

The ruling Wednesday is a milestone in the WTO’s longest-running dispute that will further test transatlantic relations, which have deteriorated under Trump’s “America First” approach to international ties. It’s also an example of Trump getting a favorable ruling from an organization he has threatened to pull out of.

The U.S. is already in a trade war with China, and any wider flareup of tit-for-tat tariffs with Europe could threaten a fragile global economy. The WTO on Tuesday cut its trade growth forecast for this year to the weakest level in a decade, warning against a “destructive cycle of recrimination.”

The Trump administration had been considering a particularly damaging trade weapon known as “carousel” retaliation, which would enable the U.S. to regularly shift around the targeted goods, people familiar with the deliberations said last month. That would increase trade uncertainty and pain for European businesses.

A senior USTR official who briefed reporters Wednesday said that the Trump administration has the authority to periodically revise the retaliatory targets and tariff rates. 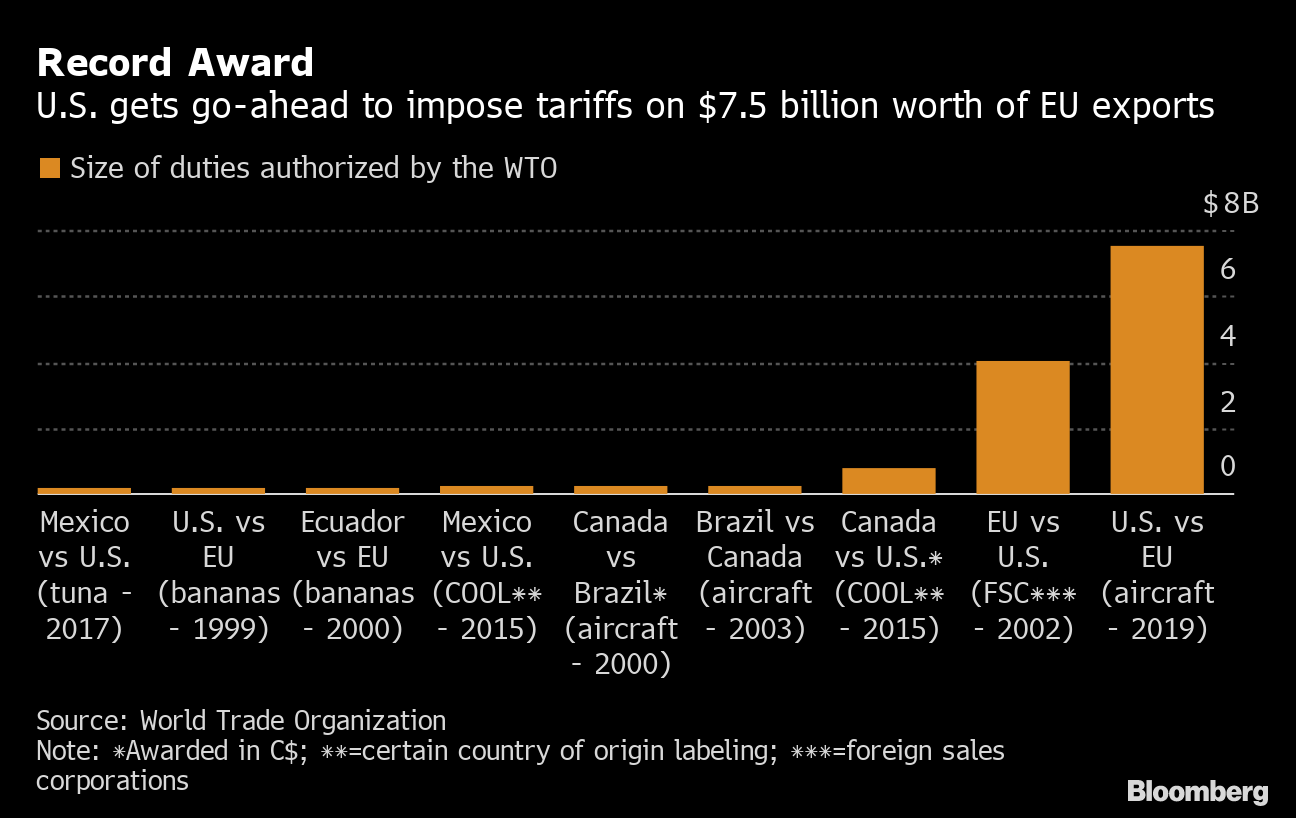 The EU will retaliate against against any Airbus-linked tariffs when the WTO rules early next year on the bloc’s dispute over U.S. subsidies to Boeing, according to European Trade Commissioner Cecilia Malmstrom.

She added that the bloc is ready to work with the U.S. on a “fair and balanced solution for our respective aircraft industries.”

Airbus warned that tariffs on its aircraft and components would come as a blow to the U.S. aerospace industry, with some 40% of its procurement coming from American suppliers.

The company also urged the Trump administration to take account of the forthcoming WTO decision on Boeing, saying those reciprocal tariffs could exceed the value of the U.S. sanctions. Chief Executive Officer Guillaume Faury repeated calls for a negotiated settlement to the dispute.

The WTO has repeatedly ruled that Toulouse, France-based Airbus unfairly benefited from launch aid loans and other trade-distorting subsidies for two Airbus models, the A380 and A350WXB.