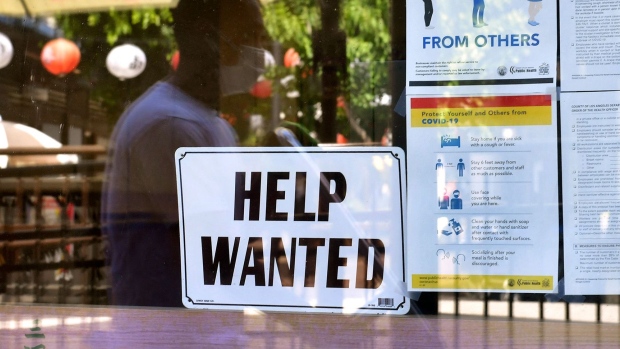 (Bloomberg) -- Unemployed Americans are in no rush to get back to work anytime soon, suggesting labor shortages that have been afflicting employers across industries are likely to persist, a U.S. Chamber of Commerce survey shows.

Some 20% of respondents said they aren’t active at all in searching for work, while another 15% said they weren’t “very” engaged, according to the results of last month’s poll. Less than half of the 529 respondents who became unemployed during the pandemic say they have been “strongly active” in the job hunt.

While the shares are slightly improved from May, when just under a third said they were consistently looking for work, the results suggest recruiters still have a long road ahead of them as they attempt to fill a near-record number of job openings.

Some 65% of respondents who lost their jobs say they don’t expect to be working again before the end of the year, with 8% saying they never intend to be back. When asked how they are managing to get by financially, almost half cited either pandemic incentives, stimulus payments or savings and investment as reasons.

Thirty-two percent say they’d prefer to switch industries in their next role, up slightly from 30% in May and reflecting the reset brought on by the pandemic as people re-evaluate professional interests alongside personal goals and priorities.

When it comes to luring workers back, the survey shows money is king: A $1,000 hiring bonus superseded back-to-work incentives including flexible hours, better health benefits, or the option to work remotely.