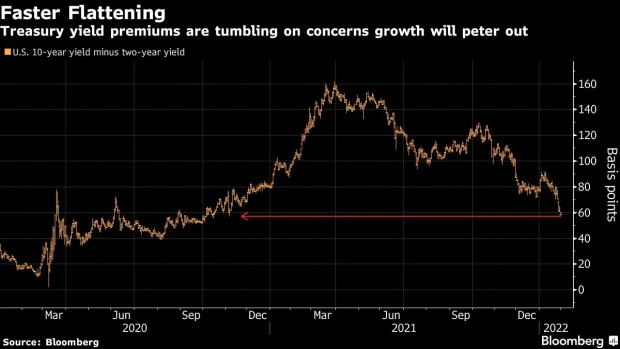 (Bloomberg) -- The Treasury yield curve flattened to the lowest level in over a year on Monday as the prospect of a super-sized Federal Reserve rate increase in March gained traction, weighing disproportionately on shorter-dated tenors.

Two-year U.S. yields climbed as much as 4 basis points after Raphael Bostic, the president of the Fed’s Atlanta branch, said the U.S. central bank could raise its benchmark rate by 50 basis points if a more aggressive approach to taming inflation is needed.

That narrowed the gap with ten-year counterparts -- which rose about half as much -- to the least since October 2020. The last time the Fed delivered a half-point increase to borrowing costs was at the height of the dot-com bubble in 2000.

The repricing extended a move spurred last week, after Fed Chair Jerome Powell underscored the policy maker’s determination to put a lid on inflation. The market positioning may have been exacerbated by hedge funds that had been leaning the wrong way before Powell’s address.

Traders are currently betting the Fed will deliver 32 basis points of tightening in March, more than fully pricing an increase of a quarter-point. That puts the implied probability of a 50-basis-point increase at almost 30%. The odds of such a move in December were zero.

Consumer prices rose an annual 7% in December, the fastest pace in almost four decades. Powell left the door open to increasing rates at every meeting, and didn’t rule out the possibility of a 50-basis-point hike.

In an interview with the Financial Times, Bostic stuck to his call for three quarter-point interest rate increases in 2022, while saying that a more aggressive approach was possible if warranted by the economic data. Bostic is a non-voting member of the FOMC this year.