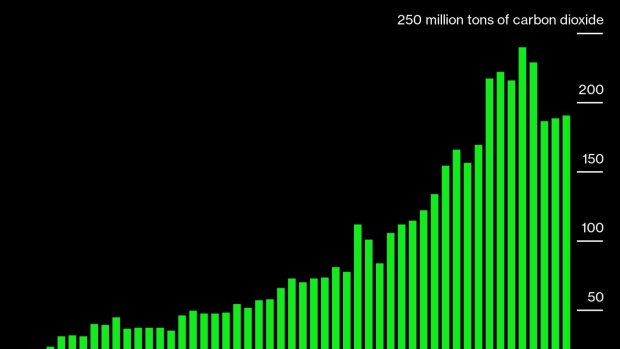 Sheik Zayed Road, one of the city's main thoroughfares, is lit by traffic light trails at night in Dubai, United Arab Emirates, on Sunday, Dec. 11, 2011. Dubai and its state-owned non-financial companies have $101.5 billion of outstanding debt and may need further financial support to meet those obligations, Moody's said. , Photographer: Bloomberg/Bloomberg

(Bloomberg) -- The United Arab Emirates could become the first nation among the Organization of the Petroleum Exporting Countries to set a net-zero goal, a move that would please Western countries pushing for stronger climate commitments but likely have little impact on its massive oil industry.

The country is considering a 2050 target to align with a global push to keep temperatures from rising more than 1.5 degrees Celsius from pre-industrial levels, according to people familiar with the discussions. They asked not to be named because talks are private and ongoing. The aim is to make an announcement before the UN climate summit in Glasgow in November, the people said.

If the UAE decides on a 2050 target, it would be the first major petrostate to set such an ambitious climate goal. Emissions from burning fossil fuels after they're shipped abroad aren’t included in such country-level climate goals, meaning the UAE could technically reach net zero while continuing with plans to invest billions in oil extraction.

Oil exports from the region that became the UAE began in the 1960s, and growing revenues have made the country among the wealthiest in the world. Consumption of fossil fuels and generation of planet-warming emissions have risen in tandem. Home to nearly 10 million people, the UAE generated 190 million tons of carbon dioxide in 2019, according to the Global Carbon Project. It has among the highest per capita emissions in the world, beating Australia and the U.S.

The UAE’s current long-term energy plan calls for only half of all power capacity to be emission free by 2050, consisting of renewables and nuclear. It plans to meet the rest of its energy needs with gas and coal. Climate Action Tracker, a nonprofit that analyzes climate goals, rates the UAE’s policies “highly insufficient.” Abu Dhabi National Oil Company, the state-owned energy giant, is planning to increase its production capacity from just over 4 million barrels a day to 5 million barrels a day within the next decade.

While the country has been working to diversify its economy since the 1980s, fossil fuels remain its biggest source of revenue, contributing about 30% to gross domestic product. Still, the nation has taken steps to bolster its green credentials. Masdar, the renewable energy arm of Abu Dhabi’s $240 billion sovereign wealth fund, was created in the 2000s to build clean power projects. The city also houses the International Renewable Energy Agency’s headquarters.

The net-zero charge is being led by Sultan Ahmed Al Jaber, the UAE’s special envoy for climate change and its minister of industry and advanced technology. He is also the chief executive officer of Adnoc and previously ran Masdar. His resume and current position in government make him an influential figure when it comes to formulating climate policies, though the ultimate decision will rest with UAE’s de facto leader and Abu Dhabi Crown Prince Mohammed Bin Zayed.

We are "certainly working on a whole-of-government approach to see at what point it would be feasible to achieve net zero," Hana AlHashimi, who heads Al Jaber’s office, said on a call hosted by the U.S.-UAE Business Council on Wednesday. "I’d encourage you to stay tuned,” she said.

The UAE has been a target of U.S. lobbying for stronger green commitments. It’s among the few countries to host U.S. special climate envoy John Kerry twice since he took office earlier this year. Kerry has said that one of his goals is to push other countries to cut emissions more rapidly over the next decade, to ensure that the world remains on track to hit net zero by 2050.

Setting a net-zero target could increase pressure on other Middle Eastern countries to do the same. Kerry expressed optimism that Saudi Arabia will agree to a net-zero emissions target of around 2050 after visiting the nation on his most recent trip to the region.