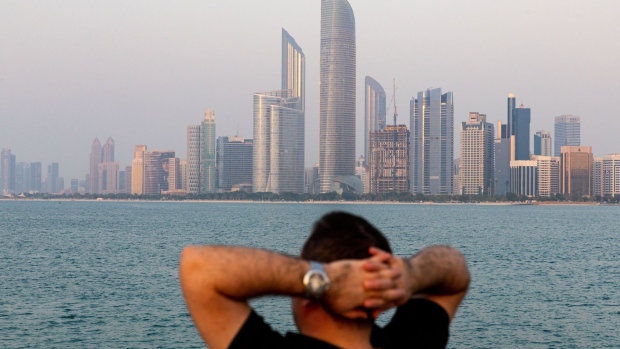 A visitor looks at the view of the city skyline from a breakwater in Abu Dhabi, United Arab Emirates, on Wednesday, Oct. 2, 2019. Abu Dhabi sold $10 billion of bonds in a three-part deal in its first international offering in two years as it takes advantage of relatively low borrowing costs. Photographer: Christopher Pike/Bloomberg , Bloomberg

The decision, effective January 22, follows “misuse” of user permits and “trespassing” into prohibited areas, the Ministry of Interior said Saturday. It said exceptions may be granted to entities relying on drones for filming.

Iran-backed Houthis last week launched strikes on the UAE that targeted a fuel depot in Abu Dhabi and the city’s main airport, ratcheting up security risks in the oil-exporting region. The attack killed three people.

The UAE ambassador to Washington, Yousef Al Otaiba, said the attack involved a combination of cruise missiles, ballistic missiles and drones, with several intercepted. The Ministry of Interior’s statement on Saturday didn’t refer to the attack.

The Persian Gulf has seen a series of attacks on shipping and oil facilities since the U.S. withdrew from the nuclear deal with Iran in 2018. Washington has blamed the attacks on Iranian-backed militias, including the Houthis in Yemen, where a Saudi-led military coalition including the UAE has been battling the group since 2015.

The Houthis regularly attack Saudi Arabia with missiles and drones, and a strike on a major Saudi oil facility in 2019 shook global oil markets and raised fears of a new conflict in the Middle East.