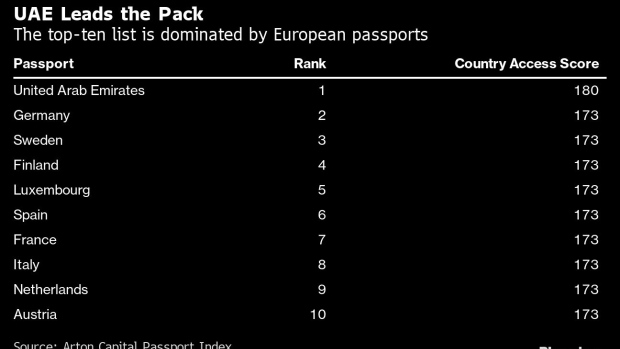 (Bloomberg) -- The United Arab Emirates, home to oil-rich Abu Dhabi and glitzy Dubai, has a new record to add to its list: the world’s most powerful travel document.

That’s according to a Passport Index published by Arton Capital that features a top-ten dominated by European countries.

With a UAE passport travelers can enter to 180 countries hassle-free — seven more than European countries such as Germany and Sweden, and nine more than Japan, whose travel document was ranked as the world’s best earlier this year in a list published by Henley & Partners. The Asian country ranks 24 on Arton’s index with easy access to 171 countries.

Throughout the pandemic, the UAE largely stayed away from the full-scale lockdowns seen around the world, instead relying on strict mask mandates and inoculations. The government’s nimble handling of the pandemic drew in visitors from around the world looking to escape curbs in their home countries.

“Global mobility is rapidly rising, despite the eruption of conflict in Europe and growing tensions over borders,” Arton said in a statement. “Though the world continues to feel the aftershocks of the pandemic, surprisingly, traveling has never been easier, with steady growth in passport power across the board, a trend that we predict will continue into 2023.”

The passport ranking adds to the UAE’s growing list of accolades, which include the world’s tallest building, deepest swimming pool and tallest hotel.

Arton said the passports of almost every single country around the world became more powerful this year, with nations keen to reap the economic benefits offered by enabling greater freedoms of movement.

Still, the year-on-year gains in the UK slowed relative to some European states and the trend may continue as Britain struggles to strike the visa agreements achieved by states within the EU, Arton warned.

“This is largely attributable to the consequences of leaving the common market and the freedom of movement associated with that,” according to Arton. The country is currently ranked 25th, with easy access to 171 countries.

Vanuatu was the only country that saw its access score drop, due to the suspension of their visa waiver scheme with the European Union. Afghanistan’s passport continued to be the least useful.