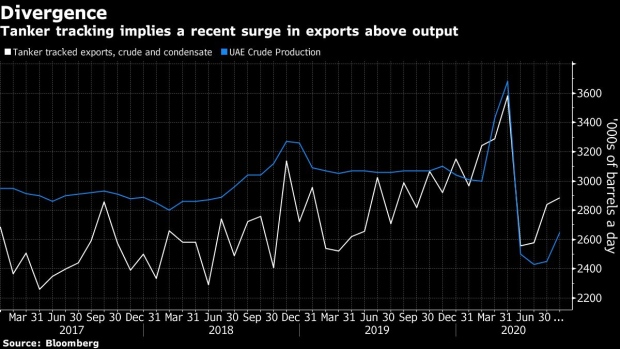 Just when OPEC seemed to have finally mastered the long-running problem of members breaching their oil-output targets, a new offender is emerging.

The United Arab Emirates -- traditionally a loyal partner of group leader Saudi Arabia -- pumped a little bit over its agreed limit in July, according to OPEC data. It has admitted doing so again in August.

Now, many traders are turning their attention to data showing the Gulf state’s excess may be far greater than previously believed, contributing to the drop in crude prices to a two-month low.

The strongest signal that something was amiss came last month from the International Energy Agency, which estimated in its closely watched oil market report that the UAE pumped 3 million barrels a day in July. According to Petro-Logistics SA, which tracks international oil-shipping movements, the country supplied even more than that in August.

Those figures are significantly higher than the 2.693 million barrels a day of August production announced by Energy Minister Suhail Al Mazrouei, which itself was more than 100,000 barrels a day above the country’s OPEC+ target.

Deriving a country’s output from shipping data isn’t an exact science. Many countries, the UAE included, have their own refineries that process crude domestically at a rate that varies from one month to the next. Some exports may come from storage tanks, rather than out of the ground, and apparent crude exports can be inflated by blending with a light oil called condensate, which is exempt from OPEC+ quotas. It’s also hard to tell whether vessels are completely full when they leave loading terminals.

Still, the belief that a core member of the Organization of Petroleum Exporting Countries is breaching its quota has been influencing prices, according to oil traders who spoke to Bloomberg News, asking not to be named because they aren’t authorized to speak to the media.

“When one of the core Gulf countries fails to meet its target on compliance, it raises market questions about the sustainability of the whole cuts project,” said Bill Farren-Price, a director at consultant RS Energy Group. “OPEC has done an incredible job of delivering the cuts so far, but they need to keep going.”

OPEC and its allies have successfully revived crude from the depths of the coronavirus crisis, when U.S. prices dipped below zero. In large part, that’s because of their intense focus on ensuring that each member is in full compliance with their output target.

Since the group agreed an historic 9.7 million barrel-a-day production cut in April, most of the effort to end quota cheating has been aimed at Nigeria and Iraq. This push, led by Saudi Arabia, has yielded significant results, with both countries showing higher compliance than in previous rounds of cuts.

Yet the perception of cracks emerging elsewhere in the OPEC+ coalition, combined with fresh doubts about the strength of the global demand recovery as Covid-19 infections accelerate, is making traders jittery.

“The market has started losing faith in the recovery, therefore bearish news is magnified and bullish news is somewhat dismissed,” said Tamas Varga, an analyst at PVM Oil Associates Ltd. in London. “OPEC will have to get its act together, otherwise this market will remain depressed.”

This could bring new tensions to the Sept. 17 meeting of the OPEC+ Joint Ministerial Monitoring Committee, which has been Saudi Energy Minister Prince Abdulaziz bin Salman’s principal forum for browbeating countries that are pumping too much.

The UAE will soon feel pressure from Saudi Arabia, although it will probably happen discreetly, according to Helima Croft, chief commodities strategist at RBC.

“Given the importance of the bilateral relationship between Riyadh and Abu Dhabi, as well as the close partnership between their two crown princes, we expect any production disagreements between these two countries to be handled quietly behind closed doors,” Croft said in a note.