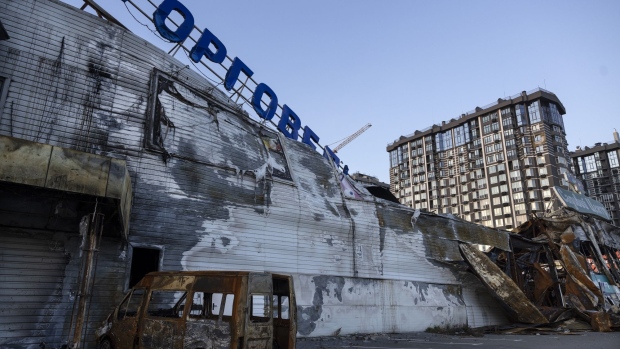 (Bloomberg) -- The United Arab Emirates said it will start trade talks with Ukraine aimed at eventually helping to rebuild its war-hit economy and open up more access for its grains.

The Gulf state said it plans to negotiate a wide-ranging economic deal which will boost bilateral trade with Ukraine, one of the Middle East’s most important sources of grains such as barley and wheat.

The pact, known as a Comprehensive Economic Partnership Agreement (CEPA), will lay the groundwork for freeing up trade flows between the two countries. The energy-rich UAE has already signed or started talks on such deals with countries it is targeting for trade growth such as India, Israel and Turkey.

The CEPA offers opportunities for exporters, investors, and manufacturers “while also opening up access to new markets in Asia, Africa, and the Middle East for Ukraine’s agricultural and industrial output,” UAE Minister of State for Foreign Trade Thani Al Zeyoudi said in a statement on Monday.

The goal is to have a “mutually beneficial deal that can not only help drive Ukraine’s economic recovery but also foster long-term growth and opportunity,” he said after meeting with Ukraine’s Economy Minister Yulia Svyrydenko.

The UAE has maintained ties with both Ukraine and Russia, as the war splits large world powers. The Gulf state’s ruler traveled to meet Russian President Vladimir Putin in October amid an upsurge in the conflict. The UAE’s business capital Dubai has become a top destination for both Russians and Ukrainians.

The UAE and Ukrainian economies are “complementary” thanks to the UAE’s position as an international trade and logistics hub and Ukraine’s as a “global food security guarantor and a growing IT powerhouse” Svyrydenko said in the statement.

Apart from food security, the talks will focus on opening up access to other sectors including infrastructure, pharmaceuticals, heavy industry, aviation, space and information technology.

The two countries had $900 million bi-lateral trade in 2021. In February of that year, more than $3 billion in trade and investment pledges were made during Ukrainian President Volodymyr Zelenskiy’s visit to the UAE. Russia’s invasion of Ukraine meant trade with the UAE fell during the first nine months of this year.

If the economic talks go to plan, the UAE could increase trade with Ukraine 10-fold over the coming decade, Al Zeyoudi told Bloomberg.

The UAE is seeking to deepen trade ties with fast-growing economies as it remodels itself as a global hub for business and finance beyond the Middle East.