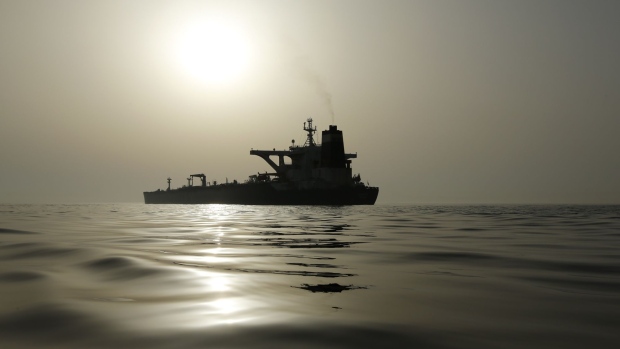 The impounded Iranian crude oil tanker, Grace 1, is silhouetted as it sits anchored off the coast of Gibraltar on Saturday, July 20, 2019. Tensions have flared in the Strait of Hormuz in recent weeks as Iran resists U.S. sanctions that are crippling its oil exports and lashes out after the seizure on July 4 of one of its ships near Gibraltar. , Bloomberg

The United Arab Emirates has started shipping rare cargoes of oil toward Europe, where crude buyers are snubbing imports from Russia in the wake of the nation’s invasion of Ukraine.

The oil tanker Moscow Spirit -- hired by TotalEnergies SA’s shipping arm -- is sailing west in the Mediterranean Sea with a cargo of about 1 million barrels of Emirati crude on board. It’s likely to deliver to a European port, according to tanker tracking and port agent data compiled by Bloomberg. The same company also has UAE oil on a supertanker that’s heading toward Egypt. It’s very possible the consignment will end up in Europe as well.

The last UAE cargoes to Europe were delivered in May 2020 when Covid-19 was upending oil markets, the tracking data show. The delivery to Egypt will likely go into a pipeline that crosses the North African country, allowing for collection at the Mediterranean port of Sidi Kerir.

Prior to the invasion, Russia was Europe’s largest external supplier of crude, but many of the cargoes that once got delivered to the continent are instead being transported to Asia.