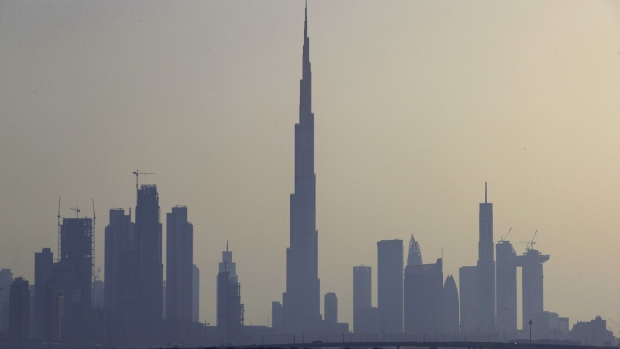 The Burj Khalifa skyscraper, center, stands above other skyscrapers on the city skyline in Dubai, United Arab Emirates, on Monday, June 18, 2018. Since the 1970s, Dubai has invested heavily in construction and infrastructure, creating a global center for finance, real estate and tourism. Photographer: Christopher Pike/Bloomberg , Bloomberg

The attorney-general of the United Arab Emirates started a “major” investigation into alleged financial violations at Dubai-based Union Properties PJSC, one of the emirate’s biggest developers. The shares tumbled.

The probe follows complaints by the market regulator, the Securities and Commodities Authority, alleging violations by Khalifa Hassan Al Hammadi, chairman of the board, along with other officials at the company, according to a statement carried Sunday by the state-run WAM news agency. Prosecutors ordered the seizure of the property of some of the accused and barred them from leaving the country, WAM said.

“The allegations include the firm selling property at less than its real value and hiding the name of the beneficiary of the sale, as well as forging documents and other violations that caused harm to the company and its stockholders,” Attorney-General Hamad Saif Al Shamsi was quoted as saying by WAM.

It’s also suspected of violating “accounting standards systems to hide the loss incurred by the company by changing the classification of its investments,” according to WAM.

A spokesman for Union Properties said the matter is currently under investigation and no charges have been filed. If the case is brought to court, the company will defend itself, the spokesman said. Union Properties maintains that the buyer of the property in question isn’t a “related party” as defined by law.

In a statement to Dubai’s bourse, Union Properties said a property sold for 30 million dirhams ($8.2 million) in March 2020 had earlier been valued at 49.5 million dirhams “before the spread of the Covid-19 pandemic and its accompanying negative effects.” It was bought by a woman who shares the chairman’s last name, according to the statement, though it wasn’t clear if there was a relation between the two.

Once among the main developers that shaped Dubai, Union Properties never fully recovered after emerging saddled with debts from the emirate’s crisis in 2009.

The investigation marks a rare case of an investigation into a listed company made public by UAE prosecutors. Although Dubai’s real-estate market has turned a corner in 2021, the emirate has suffered a years-long downturn that at one point drove prices to levels last seen during the crash of more than a decade ago.

In a filing on Sunday to the Dubai Financial Market, Union Properties said it’s seeking shareholder approval to dismiss the chairman and six other board members.

Shares in Union Properties dropped as much as 9.7% on Sunday and were trading almost 5% lower as of 2:55 p.m. local time. The stock is down over 8% for the year, valuing the company at nearly $300 million.