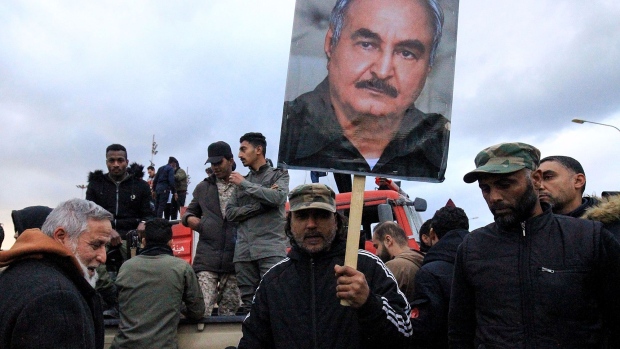 (Bloomberg) -- The United Arab Emirates is scaling back its role in foreign conflicts, accelerating a shift from policies it pursued after the 2011 Arab Spring, with the new administration in the U.S. a key factor.

The oil-rich nation has significantly reduced arms and logistical support for Libya’s eastern-based military commander Khalifa Haftar, said five people familiar with the matter, as a UN-led process to unify the North African country gathers momentum. It’s also dismantling parts of its military base in Eritrea’s port of Assab, vacating troops and hardware used to support the Saudi-led coalition’s war in Yemen, according to two of the people, who spoke on condition of anonymity.

The UAE did not respond to a request for comment but has previously denied supplying arms to Haftar. It welcomed in January the Security Council’s call for foreign forces to withdraw from Libya and declared support for a new leadership elected in February.

The move comes as President Joe Biden’s arrival in the White House prompts a recalibration among Gulf allies. They had enjoyed particularly close ties with Donald Trump and welcomed his decision to abandon the 2015 nuclear deal with Iran. Biden’s already sought to re-engage the Islamic Republic and reboot coordination with NATO and Europe. He’s also signaled he’ll be less tolerant of U.S. allies engaging in conflicts that undermine Washington’s objectives.

The UAE’s moves accelerate a roll-back of its military footprint that began under Trump, when tensions in the Gulf repeatedly threatened to tip into conflict with implications for global oil supplies and UAE business hub Dubai.

Covid-19 and low oil prices further exposed the fragility of the small OPEC member state that punches above its weight internationally. The International Monetary Fund said in October it expects the UAE economy to grow by 1.3% this year after a 6.6% contraction in 2020.

When popular uprisings swept the region in 2011, the UAE sought to neutralize the influence of political Islam and its enthusiasts in Ankara, Doha and Tehran. It sees such movements as destabilizing and a threat to dynastic rule.

While it’s not seen abandoning such strategic goals, diplomats and analysts say Abu Dhabi has been refocusing its methods. It’s leaning more toward politics, working through local proxies, and avoiding the negative attention risked by direct and costly intervention.

“There is a new administration in the U.S. and the Emiratis need to get the optics right,” said Tarek Megerisi, policy fellow at the European Council on Foreign Relations.

It coincides with a change of personnel. Anwar Gargash, the minister of state for foreign affairs who became the most visible spokesperson for UAE interventions, stepped down to take on a diplomatic advisory role. The UAE promoted Khalifa Shaheen al-Marar to minister of state. He has served as ambassador to Turkey, Iran and Syria, indicating a possible shift toward mending ties with rivals.

“The risk calculation has changed for the UAE,” said David Roberts, an associate professor at King’s College London. “There will be more potential for blow back from this administration on several files, whether in regards to Yemen or sanctions-busting in Libya. This is really the de-risking of the more risky aspects of UAE foreign policy.”

The most obvious shift has come in Yemen, where the UAE joined a Saudi-led campaign to oust Iranian-backed Houthi rebels from the capital Sanaa. Six years on, the war’s failed to achieve those aims while contributing to the world’s worst humanitarian disaster, prompting Biden to demand an end to fighting while putting weapons sales to the UAE and Saudi Arabia on hold.

The UAE began withdrawing from Yemen in late 2019 but maintained support for southern separatist fighters. It’s now scaling back in the Horn of Africa, where it had spent the past few years building a military and diplomatic presence -- even helping to broker a peace deal between Ethiopia and Eritrea -- as part of its broader competition for influence.

The involvement has come at a cost. The New York Times reported in February a foiled attack on the UAE embassy in Ethiopia was orchestrated by an Iranian sleeper cell seeking targets in response to the U.S. assassination of a high-profile spymaster last year.

“The UAE’s regional assertiveness along with Saudi has been a major failure,” said David Wearing at Royal Holloway, University of London. “Wiser heads in the UAE would accept that they don’t have the capacity for this and, therefore, Biden might be pushing an open door.”

In Libya, where a confidential United Nations report found in May the UAE had been operating a covert air bridge to supply Haftar with weapons in contravention of UN arms embargo, the pivot is more recent.

The UAE is now completely out of Libya militarily, said two people with knowledge of the matter. The UAE had expressed frustration with Haftar after Turkish intervention last year helped to end his offensive to overthrow the internationally-recognized government in Tripoli.

A third person with knowledge of the matter said UAE flights to eastern Libya had fallen significantly though that might be because they’d already deployed enough equipment for any future battle. Two others said it had reduced its military footprint, though all said there was no evidence it’s severed contact with Haftar or Sudanese and other mercenaries involved in the fight.

Mercenaries deployed by the Kremlin-linked Wagner Group to support Haftar remain in Libya. Meanwhile, the Al-Watiya airbase southwest of Tripoli, seized from Haftar by Turkish-backed government forces last year, has been expanded, its runway extended to allow for larger aircraft and the potential use of advanced fighter jets, one of the people said.

Though that would largely preclude further air strikes by Haftar on western Libya, Turkey may have little appetite to take the fight to his eastern stronghold, resulting in the current stalemate.

The UAE’s regional rethink doesn’t amount, however, to an automatic win for Turkey, which is recalibrating its own approach, switching to diplomacy with Europe in the dispute over Cyprus and gas exploration in the eastern Mediterranean.

“All sides seem to be getting tired of these forever wars,” said Mohamed Anis Salem, former ambassador and UN official, now with the Egyptian Council for Foreign Affairs. “They’re realizing that they’re better off reorienting those expensive and politically-fraught strategies.”