The lockdowns of the past year have tempted food delivery companies in the U.S. and Europe to gorge. But they’re filling up on the equivalent of junk food — offerings that accelerate growth but have little nutritional value.

Top of the list is grocery deliveries. Platforms such as Uber Eats and Deliveroo have capitalized on more people ordering groceries online and have teamed up with various supermarkets to offer products for more or less immediate delivery. The move is a good way to increase revenue, but a dreadful way to improve profit sustainably. That’s an imbalance that the industry needs to reevaluate if it wants to deliver on its high valuations. Morgan Stanley estimates the online food delivery market hit US$45 billion last year.

The problem is that restaurants are significantly more profitable than grocery stores. A US$10 pizza could only cost US$2 to make, making it easier for a restaurant to stomach the commission of as much as 30 per cent that Uber Eats or Deliveroo might charge for delivery. But a grocery’s gross profit margin is less than half that of a restaurant, so the supermarket chains have likely negotiated to pay far less commission.

To bridge the gap, food delivery companies then charge a higher fee for bringing your groceries — in the U.K., it’s usually 4.99 pounds (US$6.82), which can be two or three times as much as the fee for restaurant orders. People might be willing to pay that now, while they’re still concerned about visiting stores in person, but it’s hard to imagine they’ll continue to do so in great numbers when the lockdowns permanently ease. Most customers are fickle when it comes to price, despite companies’ objections that their apps are habit-forming. (Remember the ridehailing price wars, anyone?)

Nonetheless, it’s clear why the food delivery platforms are pursuing the strategy. Because most of these businesses are yet to be profitable, they are valued as a multiple of revenue rather than profit. So if they boost sales, perhaps the market will afford them a higher valuation.

In the case of Uber Technologies Inc., food delivery is the only source of growth right now: Analysts estimate that total revenue fell 20 per cent last year as fewer people used the eponymous ride-hailing service. 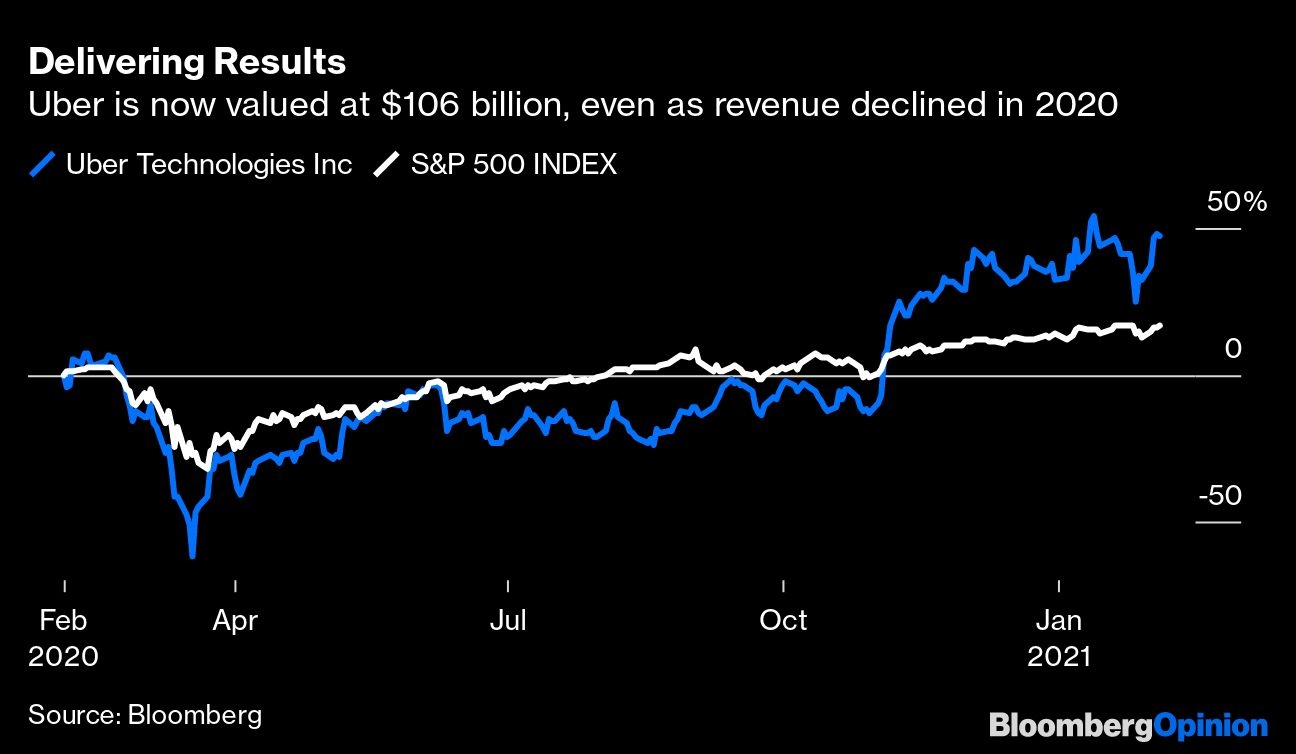 London-based rival Deliveroo meanwhile appears to be priming itself for an initial public offering, even after it raised US$180 million in new funds last month at a US$7 billion valuation. Given the revenue-based valuation model, it seems to be prioritizing sales growth, even if some of those sales appear unsustainable.

That is perhaps why competitor Just Eat Takeaway.com NV has been more circumspect about grocery deliveries. Unlike Deliveroo and Uber Eats, it simply connects hungry customers with restaurants that assume responsibility for delivering food themselves. That means the Amsterdam-based company charges a lower rate of commission, thereby booking less revenue, but it also has lower costs, so such revenue enjoys a higher profit margin.

Uber Eats and Deliveroo, on the other hand, run their own delivery logistics. While less profitable, that was a boon when shuttered restaurants urgently needed to start offering takeout. When the pandemic fades, those platforms may therefore see a steeper drop-off in the number of restaurants needing their services than Just Eat Takeway.com, according to Bloomberg Intelligence analyst Diana Gomes.

Sure, there are exceptions: In markets such as India, where labor costs are lower, delivery can be economical even for small-ticket items. It’s just harder to justify in Europe and the U.S. And Uber’s US$1.1 billion deal to acquire alcohol-delivery startup Drizly this week is the exception that proves the rule, because booze commands higher profit margins than food.

So far the delivery companies seem addicted to growth at the expense of profitability. The end of the pandemic may bring the realization that leaner is better.