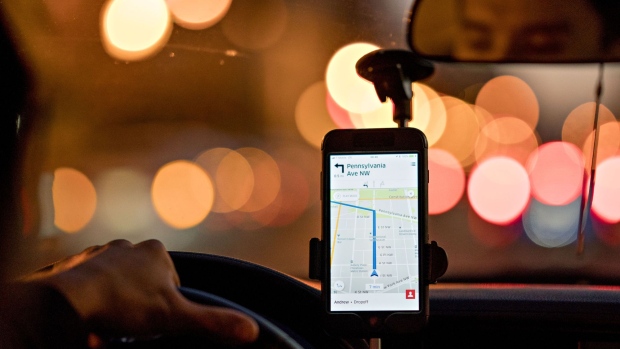 A driver uses an Uber Technologies Inc. car service app on a mobile device while driving in Washington, D.C., U.S., on Wednesday, Nov. 29, 2017. Uber Technologies Inc.’s net loss widened to $1.46 billion in the third quarter, according to people with knowledge of the matter, as the ride-hailing leader struggled to fend off competition, legal challenges and regulatory scrutiny. Photographer: Andrew Harrer/Bloomberg , Bloomberg

(Bloomberg) -- A number of upstart ride-hailing apps are taking on Uber and Lyft with the promise of treating drivers better.

Among them are Dallas-based Alto, which hires drivers as employees and gives annual compensation. Empower, based in McLean, Virginia, and Wridz in Austin, Texas give 100% of cab fares to the driver. The Drivers Cooperative in New York promises a share in the profits.

Drivers for Uber Technologies Inc. and Lyft Inc. have long complained about issues from platform charges to employment status. As quarantines decimated demand for rides, many drivers quit and found unemployment benefits outpaced wages from driving, some shifted into food and grocery delivery, while others sought full-time work. This shift in the power dynamics between drivers and the apps saw the tech giants paying millions in bonuses to lure them back.

The new startups can tap into that dissatisfaction. But to win market share they must confront the efficiency with which Uber and Lyft match riders with drivers, and the massive scale of those companies. The incumbents have reported progress in luring and retaining drivers, raising pressure on new entrants to ensure they can compete.

“A lot of drivers don’t feel that they are paid enough, that the commission is too high, that the companies don’t care about them. And so, you could imagine for new rideshare companies it’s kind of easy,” said Harry Campbell, longtime driver and founder of the Rideshare Guy blog. “The really hard part is the customers. There’s a reason why no one has really come close to unseating Uber and Lyft.”

Uber and Lyft regard drivers as independent contractors. Uber takes almost 27% in commission. Lyft takes a commission but doesn’t disclose its share. This contractor model means drivers don’t get the security of a minimum wage, insurance, overtime pay or other benefits. The companies say this enables lower fares and gives drivers flexibility, but their decision has spurred lawsuits and state legislation.

A spokeswoman for Lyft highlighted that the number of active drivers reached a two-year high in the second quarter. A spokeswoman for Uber noted growth in drivers on the platform, and declined further comment. Both companies have worked to incorporate more driver-friendly features to their apps in recent months, such as upfront pricing that allows drivers to see a fare before accepting a ride.

Alto owns and manages its fleet of luxury cars and gives drivers hourly rates along with benefits like health care. Chief Executive Officer Will Coleman said the company also looks for drivers from big employers like Amazon.com Inc. and charges riders a bit more than a regular Uber though less than the premium-level Uber Black.

Other startups promise drivers will receive 100% of the fare in exchange for a subscription fee. Wridz launched earlier this year with a $100 monthly charge, though it’s currently running free trials for drivers while it establishes a passenger base.

Empower got started the same year. It charges $250 a month in Washington DC, its biggest market, where it offers monthly and daily subscriptions. There are monthly and weekly options in New York City and North Carolina. Its pitch to drivers hones in on their dissatisfaction with the incumbents.

“We just have to find drivers who are Uber and Lyft drivers, who for the most part hate Uber and Lyft, and suggest that they can work for themselves, make more money, be the actual customer, and be listened to and heard,” said Empower founder Josh Sear.

Meanwhile The Drivers Cooperative, based in Long Island City, is a worker-owned take on rideshare. It takes a 15% commission on each trip and guarantees drivers earn at least $30 an hour. Any profit goes back to drivers.

“Our goal is to break even early, become profitable, provide a high quality service and good pay for drivers and benefits,” said co-founder Erik Forman.

Erin Hatton, a sociology professor at the University at Buffalo whose work focuses on labor and social policy, sees a battle ahead for these companies.

“It’s possible that a company with a strong focus on worker rights and protections could gain traction against the more established companies, given those companies’ poor record on those issues,” Hatton said. “But it’s clear that it’s hard to turn a profit in this industry without being highly subsidized and/or charging much higher rates to consumers.”

The driver-focused startups are a fraction of the size of their rivals -- Uber and Lyft have a combined market capitalization of more than $60 billion.

Alto has raised $59.5 million and Empower has raised $10.1 million, according to Crunchbase. Drivers Cooperative raised more than $1 million through crowdfunding and has also taken on debt.

Wridz founder Steve Wright says the company is self-funded, and he’s not that worried about competing with incentives from Uber and Lyft.

“The driver incentive is not a concern for us,” he said. “All the incentive you need is to give the driver 100% of what’s available to give them.”

It’s not clear how much longer Uber and Lyft will keep shelling out to keep drivers happy. The two San Francisco-based companies are relatively new to profitability, and shares rose after recent earnings reports indicated they’re on a path to rein in spending on driver bonuses.

Even if fading incentives burnish the appeal of these smaller rivals, they still must attract customers willing to see them through some early issues. Driver’s Coop, for instance, doesn’t yet have on-demand cars ready to pick customers up unless they are willing to wait about 45 minutes to an hour.

“Unfortunately, I don’t think that most consumers care quite enough about worker rights to make that more ethical choice if it’s more expensive or less available,” Hatton said.