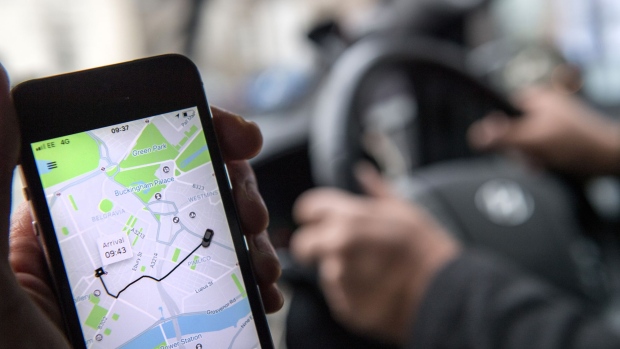 The Uber Technologies Inc. ride-hailing service smartphone app sits on a smartphone display during a journey in this arranged photograph in London, U.K., on Friday, Dec. 22, 2017. Uber will be regulated in European Union countries as a transport company after the bloc's top court rejected its claim to be a digital service provider, a decision that could increase legal risks for other gig-economy companies including Airbnb. Photographer: Chris J. Ratcliffe/Bloomberg , Bloomberg

Uber Technologies Inc. is backtracking on plans to move its Asia-Pacific regional hub to Hong Kong, citing a lack of certainty around regulation of ride-sharing in the city.

The company had announced in May that it was ready to relocate its Asian headquarters from Singapore “and establish an innovation and engineering hub” in Hong Kong, provided authorities removed regulatory hurdles (ride-sharing is officially banned).

Uber said in a statement that it would stick with Singapore for the time being. It made no mention of controversial national security legislation passed in June that gives Hong Kong authorities sweeping powers to police online data, prompting global tech firms to reconsider their future commitment to the city.

“We have seen strong public support for reform, but not the level of certainty from the government that we need,” Uber spokesman Chris Brummitt said via email. “As we continue those efforts, we have decided to keep Singapore as a regional hub for the medium term.”

In its May announcement, Uber promised to create jobs and opportunities for Hong Kongers, noting how positively it had been received in the city with more than a quarter of the population having used its services. It has close to 250,000 driver-partners in the city and more than 6,400 restaurants participating in its Uber Eats food delivery platform, the company said.