Uber Technologies Inc Chief Executive Travis Kalanick, co-founder of one of the most influential technology companies of its generation, resigned on Tuesday under pressure from investors after a string of setbacks. Kalanick's departure caps a tumultuous period for the world's largest ride-services company that has revolutionized the taxi industry and challenged transportation regulations worldwide.

The 40-year-old's pugnacious style largely defined Uber's approach and helped it become a transportation colossus valued at US$68 billion, the largest private firm backed by venture capitalists in the world.

But that brashness has also been blamed for scandals this year, from the unearthing of a culture of bullying and discrimination at Uber to a U.S. Department of Justice federal investigation and a high-stakes lawsuit filed by Alphabet Inc (GOOGL.O) that threatens Uber's self-driving car ambitions.

"I love Uber more than anything in the world and at this difficult moment in my personal life I have accepted the investors' request to step aside so that Uber can go back to building rather than be distracted with another fight," Kalanick said in an email to employees that was seen by Reuters.

"Travis has always put Uber first. This is a bold decision and a sign of his devotion and love for Uber. By stepping away, he’s taking the time to heal from his personal tragedy while giving the company room to fully embrace this new chapter in Uber’s history. We look forward to continuing to serve with him on the board," Susie Heath, senior communications associate at Uber Canada told BNN in a statement.

Kalanick will remain on the board. But his departure as CEO widens an already gaping hole at the top of Uber which has no chief operating officer, chief financial officer or general counsel at the moment. For now, 14 people who reported to Kalanick are running Uber.

It is not clear who will be Uber's next CEO. Facebook Inc (FB.O) Chief Operating Officer Sheryl Sandberg has been identified as a target in media reports, but a source close to Sandberg told Reuters she plans to stay at the online social media company.

Kalanick faced increased scrutiny for a culture of sexism and rule-breaking at the company he helped start in 2009. After a video showing Kalanick berating an Uber driver who had complained about falling wages was released in February, the CEO made a public apology and promised to seek "leadership help."

It is not known publicly how much of Uber Kalanick owns, but he has until now wielded near-total control of the company, made possible by a dual-class share structure that gives him and key allies 10 votes per share.

Ultimately, it was some of Uber's main investors who forced Kalanick out, according to a source familiar with the matter.

Venture capital firm Benchmark, whose partner Bill Gurley is one of Uber's largest shareholders and sits on its board, plus investors First Round Capital, Lowercase Capital, Menlo Ventures and Fidelity Investments, all pressed Kalanick to quit.

A source close to Menlo Ventures, which led one of Uber's early financing rounds, told Reuters that the firm helped write a letter calling for Kalanick to step down.

The investors delivered the letter to Kalanick while he was in Chicago, the New York Times reported, citing people with knowledge of the situation. (http://nyti.ms/2soTB79)

Kalanick's decision "was a surprise to everyone", a second Uber spokesman said.

In a statement sent to Reuters, the Uber board of directors called Kalanick's resignation "a bold decision" that "gives the company room to fully embrace this new chapter in Uber's history".

The CEO's departure comes after a lengthy investigation led by former U.S. Attorney General Eric Holder, which concluded that Kalanick's authority should be reduced and that board oversight and independence should increase.

Uber hired Holder's firm Covington and Burling to look into its culture and workplace practices after a female former employee, Susan Fowler, publicly accused the company of sexual harassment.

What followed was a mountain of scandals, including a criminal investigation into Uber's use of technology to evade regulators in certain cities and a trade secrets lawsuit filed by Alphabet's self-driving division, Waymo.

Uber faces other lawsuits filed by drivers over their pay and treatment, and Uber fired 20 employees for incidents involving discrimination, sexual harassment and other bad behavior earlier this month. 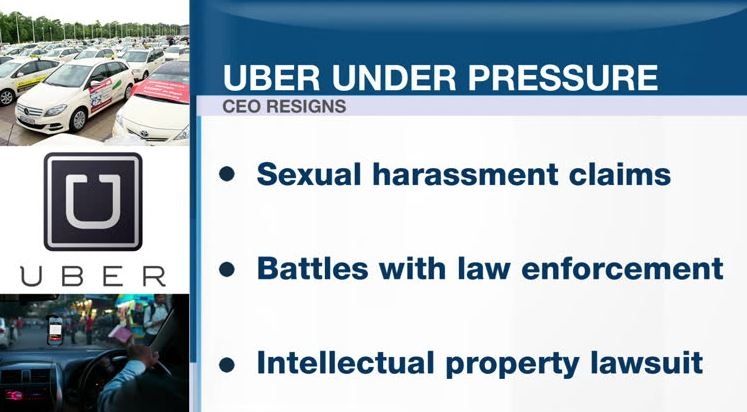 Following the release of the damning Covington report, Kalanick said last week he would take a leave of absence to grieve for his mother, who died recently in a boating accident that also seriously injured his father, and to work on his leadership skills.

"Uber couldn't make a credible claim that it was committed to the changes it has to make if he was hovering in the wings, waiting to return as CEO," said Erik Gordon, a technology and entrepreneurship expert at the University of Michigan's Ross School of Business.

Eric Alexander, the head of Asian business for Uber, shared medical records internally, including with Kalanick. Alexander argued they showed the woman had been assaulted but not raped, people who spoke to him said. Alexander was fired earlier this month.

Even some of Kalanick's staunchest allies have found fault with how Uber has been run. In a blog post on Medium published on Tuesday, Uber co-founder Garrett Camp, who has long aligned himself with Kalanick, called Uber's problems serious.

"Over the years we have neglected parts of our culture as we have focused on growth. We have failed to build some of the systems that every company needs to scale successfully," Camp wrote.

Kalanick has enjoyed sweeping power at Uber, through his share ownership and voting power, as well as his commanding personality and micromanaging tendencies.

His authority is not atypical in Silicon Valley, where investors often give founders great autonomy, and Uber's board frequently voiced support of Kalanick despite mounting problems.

In March, following the start of the Holder investigation, Uber director Arianna Huffington said on a call with reporters the board had full confidence in Kalanick.

She repeated that position on Friday in an interview with Reuters by saying Kalanick's leave of absence was solely his decision.

Gurley, one of Kalanick's closest confidants, praised the CEO on Twitter following his resignation.

There will be many pages in the history books devoted to @travisk - very few entrepreneurs have had such a lasting impact on the world.