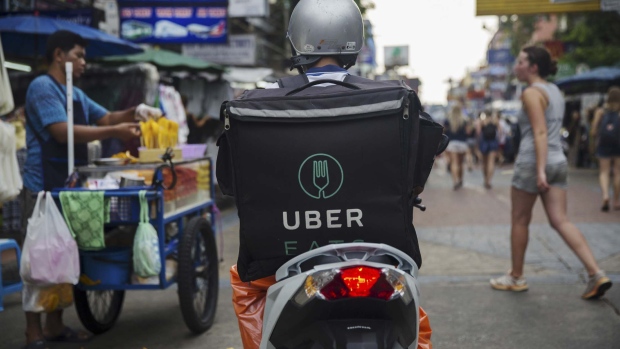 (Bloomberg Opinion) -- Uber Technologies Inc.’s deal to acquire Postmates Inc. isn’t just about the need for consolidation in the food-delivery industry. The company also has its eyes on a bigger prize: nabbing business from Amazon.com Inc. and Walmart Inc. in the local commerce market.Early Monday, and following reports of a deal last week, Uber announced it was buying Postmates for $2.65 billion in an all-stock transaction. A combined Uber Eats-Postmates would vault the company to second place in the U.S. food-delivery market with total share of about 30%, versus DoorDash’s 45% share, according to the latest Second Measure data. I previously wrote about how Uber should acquire Postmates, even though the option wasn’t as ideal as its failed merger with Grubhub, as it would still move the needle for the company by rationalizing the overly promotional industry environment and generating significant cost synergies. And in fact, Uber confirmed Monday that the merger would result in more than $200 million annualized savings after the first year, primarily through cuts in marketing and administrative expenses. Uber shares rose 6% following the acquisition news.

But as important as the merger is in creating a bigger player with the chance of improving profitability and increasing scale, it also opens the door for an even more important longer-term opportunity to compete with big retailers for all categories in local commerce, Uber CEO CEO Dara Khosrowshahi  told investors on a call Monday. He explicitly called out Amazon and Walmart.

Uber Eats has experimented with non-food deliveries. Earlier this year, the company expanded partnerships with supermarkets and local stores in a small number of markets to deliver groceries and certain essential items. But the merger will help to accelerate such efforts because of Postmates’ advanced technology platform, which offers better capabilities for batching orders together and increasing efficiencies. “The vision for us is to become an everyday service,” he said. Postmates is a “great step along that vision” of delivering anything to consumers homes within a couple hours.

The Postmates’ website offers more clues on this future. The upstart already delivers groceries, alcohol and drug-store items in some markets, so for the combined company, grocery may be the best area of focus to start. But Postmates’ platform also can be used for other retail products such as home goods as well. Investors should take note of this, especially given Uber management’s clear message that the deal has much deeper ramifications beyond food delivery. As the pandemic is structurally boosting the trends towards all things digital, the deal may pay bigger dividends for Uber —  and make Postmates less of a consolation prize.