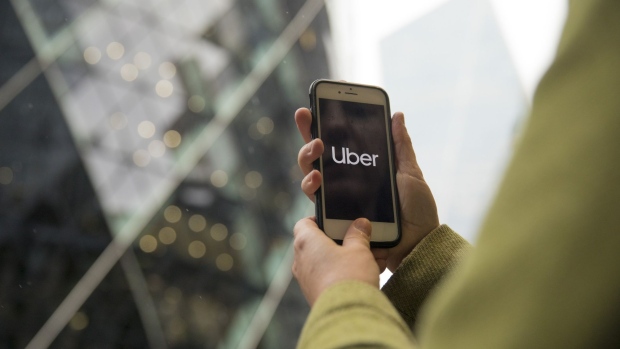 A commuter uses the Uber Technologies Inc. app on a smartphone in view of 30 St Mary Axe also known as 'the Gherkin' in this arranged photograph in London, U.K., on Monday, Nov. 25, 2019. Uber lost its license in London for the second time in less than three years, putting one of its biggest markets outside of the U.S. at risk after the transport regulator said it failed to address safety concerns. , Bloomberg

Uber Technologies Inc. dodged a ban in its biggest European market after a London judge said the ride-hailing service deserved an 18-month license to operate in the U.K. capital.

Uber did enough to satisfy the court that it was now “fit and proper” to hold a permit, despite its “historical failings,” Deputy Chief Magistrate Tan Ikram said Monday. In November, Transport for London revoked its license a second time over concerns that it failed to adequately verify drivers’ identities and safeguard passengers.

While Uber’s new license is shorter than the 5-year permit it could have received, the magistrate was far more complimentary of its executives than a prior judge in 2018 who criticized the “gung-ho attitude” of previous management. Ikram pointed to Uber’s “credible and honest” witnesses and said the firm may perhaps be doing “even more” than what a reasonable business is expected to do in the sector.

The license review is just one of a number of legal battles the California-based firm is fighting. It is facing other lawsuits, including in its home state, that would give drivers expanded employment rights that could wreck its gig-economy business model. A U.K. Supreme Court ruling in another suit over drivers’ worker rights will be given as soon as October, and will determine whether British drivers are considered to be employees of Uber or self-employed.

In his ruling, Ikram said that Uber “does not have a perfect record but it has been an improving picture.” The magistrate said the test of whether Uber is “fit and proper” doesn’t require perfection.

“This decision is a recognition of Uber’s commitment to safety and we will continue to work constructively with TfL,” Jamie Heywood, Uber’s manager for Northern & Eastern Europe, said in a statement. “There is nothing more important than the safety of the people who use the Uber app as we work together to keep London moving.”

It’s not a totally rosy picture, though. Although the 18-month license is longer than the 15-month license Uber received in 2018, it is considerably shorter than the maximum five-year permit it could have been granted.

TfL’s lawyer Marie Demetriou said it “considers it important to retain a close eye on Uber” given “the serious historical breaches.”

“This 18-month license with a number of conditions allows us to closely monitor Uber’s adherence to the regulations and to swiftly take action if they fail to meet the required standards,” TfL said in a statement.

Its new license is subject to 21 conditions, up from the 14 requirements attached to its previous permit. Most of the new conditions tackle driver-photo identification and insurance fraud, after concerns were raised during the trial.

This “demonstrates that Uber will have to work hard to continue to prove to TfL and the court that it has really changed,” Anna McCaffrey, a lawyer at Taylor Wessing, said by email. “If not, Uber is likely to find itself back in court.”

Steve McNamara, general secretary of the Licensed Taxi Drivers’ Association, which represents some of the city’s black-cab drivers, called the ruling a “disaster for London.”

Uber “has demonstrated time and time again that it simply can’t be trusted to put the safety of Londoners, its drivers and other road users above profit,” he said in a statement. “Sadly, it seems that Uber is too big to regulate effectively, but too big to fail.”