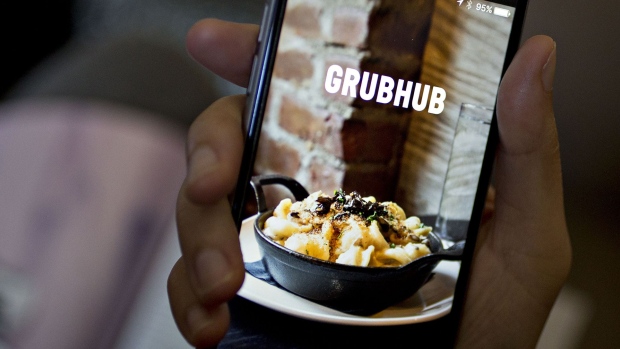 (Bloomberg) -- Uber Technologies Inc. is in talks to buy food delivery rival Grubhub Inc. just as cities are cracking down on delivery fees, limiting how much the companies will be able to profit from the pandemic delivery boom.

News of the discussions, reported by Bloomberg, came a day before New York is set to vote on restrictions that would bar companies like Grubhub and DoorDash Inc. from charging restaurants delivery fees of more than 15%, and impose limits on fees for marketing and other services. Regulators in San Francisco and Seattle have already set such limits and cities including Boston, Chicago and Los Angeles have mulled doing the same. Those regulations are meant to protect restaurants and consumers as they depend on food delivery services to get them through shelter-in-place orders.

“Many small businesses and customers rely on these services and we’ve seen that the fees, either on restaurants or on customers, can spike to unacceptable levels and without competition there’s less to limit their ability to price gouge,” said Matt Haney, who sits on the San Francisco Board of Supervisors and has criticized Uber for its delivery fees.

Chicago-based Grubhub said in a statement that “consolidation could make sense in our industry,” while Uber, which operates Uber Eats in addition to its core ride-hailing service, said it’s “constantly looking at ways to provide more value to our customers, across all of the businesses we operate.” The deal talks could still fall apart over terms or face antitrust scrutiny.

Food delivery tie-ups are complicated. Even before the Covid-19 crisis, the businesses were unprofitable as they fought for market share. In New York alone, at least a dozen food delivery services compete for customers who are increasingly ordering from multiple platforms. Grubhub, the publicly traded incumbent, had been forced to abandon profits to play defense against upstarts like DoorDash, the U.S. market leader, and Postmates Inc., which had been preparing for a public offering this year. Investors hoped consolidation would help limit losses, but inflated private valuations and the risk of antitrust review presented hurdles to deal-making.

Then Covid-19 hit. Uber has had to reassure investors that it has enough cash to survive the year and pushed its goal of making an adjusted profit out to 2021. It also told 3,700 employees that they were losing their jobs, many of them reportedly over a Zoom call. Grubhub abandoned its profit target.

Profits were already elusive in the food delivery business. Uber has seen its adjusted revenue for food delivery increase by 121% in the first three months of this year from a year ago, according to the company’s latest financial report. But even with that massive increase in sales, adjusted losses in food delivery actually increased by 1% in that period to $313 million. And that’s before the full brunt of the pandemic took hold in the U.S.

That’s why mergers seemed likely to many analysts and investors. “We’ve long believed that consolidation in online food delivery is inevitable, as too many companies with identical business models/offerings are depressing industry profitability via a cutthroat battle for market share expansion,” DA Davidson analyst Tom White wrote in a note Tuesday. White had expected Grubhub to merge with market leader DoorDash. A deal between Grubhub and Uber would pair up the second- and third-place food delivery players, respectively.

In March, DoorDash accounted for 42% of the U.S. meal delivery market, according to data firm Second Measure. Grubhub accounted for 28% and Uber accounted for another 20%. Together, a combined Uber and Grubhub could become the market leader in the U.S. Overall, the food delivery industry grew by 28% in March from a year earlier. That’s actually down from the 30% to nearly 60% growth rate the industry was seeing before the pandemic, according to Second Measure. In both periods, DoorDash’s growth rate far outpaced both Grubhub and Uber, according to the analytics firm.

White warned that regulators are poised to scrutinize any such deal-making. “We believe a combination of UBER/GRUB during this pandemic would receive even closer regulatory review/scrutiny than usual, given the impact any deal could have on a restaurant industry that is struggling to survive in the face of the pandemic,” he said.

Indeed, Representative David Cicilline, a Democrat from Rhode Island who heads the House antitrust subcommittee, weighed in with a scathing reaction to the merger talks. “Uber is a notoriously predatory company that has long denied its drivers a living wage. Its attempt to acquire Grubhub -- which has a history of exploiting local restaurants through deceptive tactics and extortionate fees --marks a new low in pandemic profiteering,” Cicilline said in a statement. He said the deal underscores the urgency for a “merger moratorium.”

Restaurant advocates said they were worried, too, about the potential consequences of a deal. “It’s extremely concerning,” said Andrew Rigie, executive director of the NYC Hospitality Alliance, a group that represents restaurants in New York. Rigie said Grubhub, and Seamless, which it owns, already dominate “the New York City third-party delivery market, and they use their leverage and market share at the expense of local restaurants.”

Bradley Tusk, an early Uber adviser who has sold his stake in the company, said if the policies cities are considering take hold long term, “it may be that consolidation is the only way to have a couple of market players that can survive at all.” Otherwise, he warned that food delivery could end up looking like the costly ride-hailing rivalry between Uber and Lyft Inc. “Uber should have found a way to buy or kill Lyft a lot earlier,” Tusk said. “The unit economics of ride sharing would be a lot easier if they had and I think they’re trying to learn that lesson now with the acquisition of Grubhub.” (Tusk also ran the 2009 mayoral campaign of Michael Bloomberg, the owner of Bloomberg’s parent company, Bloomberg LP.)