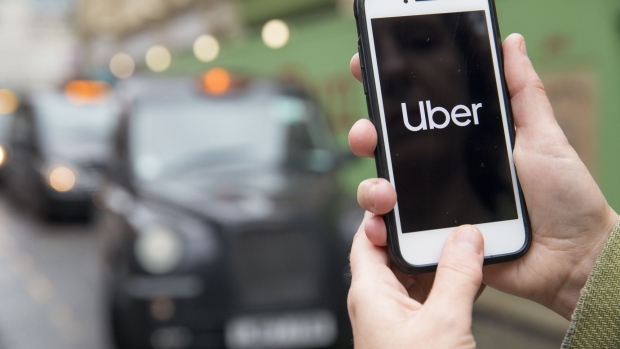 A commuter uses the Uber Technologies Inc. app on a smartphone in view of a line of black cabs waiting to pick up passengers in this arranged photograph in London, U.K., on Monday, Nov. 25, 2019. , Bloomberg

NEW YORK -- Uber is offering incentives to drivers to transition to cleaner vehicles while acknowledging that emissions from its rides have risen in recent years.

The San Francisco-based ride-hailing giant said Tuesday that a ride in one of its vehicles remains 41 per cent more carbon-intensive than taking a trip in a personal car with others. Uber studied 4 billion rides that it provided from 2017-2019 and found that while ridership grew 36.6 per cent, the average carbon intensity for rides declined 6 per cent, meaning rides were becoming more efficient. But the company admitted that its carbon footprint increased as ridership grew.

It’s our responsibility as the world’s leading mobility platform to more aggressively tackle climate change. That's why @Uber is committing to move 100% of rides to EVs in US, Canadian, and EU cities by 2030, and to become a fully zero-emission platform by 2040 (1/6)

"We can do a lot better," said Shin-pei Tsay, director of policy, cities and transportation at Uber. "Driving down carbon intensity and lowering emissions is well within reach."

Many people have shied away from travelling in shared vehicles due to the pandemic. Gross bookings for Uber's mobility business plunged 73 per cent in the second quarter, and Lyft's number of active riders fell 60 per cent compared to the same time last year.

But both companies are banking on an eventual return. Uber said all rides will be in electric vehicles by 2030 in the U.S., Canada and Europe. It plans to be a fully zero-emissions platform by 2040, which on the corporate side may involve buying carbon offsets. Lyft, which operates in the U.S. and Canada, said in June that its rides would be in 100 per cent electric vehicles by 2030.

General Motors is partnering with Uber to offer discounts to Uber drivers, providing a US$2,400 to US$2,750 discount for them to buy a Chevrolet Bolt vehicle and 20 per cent off vehicle charging equipment. The Bolt's starting price is about US$37,000. Uber also has negotiated discounts with other companies ranging from 10 per cent to 50 per cent off for its drivers to charge electric vehicles in different locations.

Altogether, Uber plans to spend US$800 million on programs to help hundreds of thousands of drivers switch to electric vehicles by 2025.

"Transportation demand is growing faster than anything else and we haven't done nearly enough as a community to take it down, to take down our carbon," Tsay said.

While Uber's commitment states it will work with drivers to make the transition more cost-effective and profitable for them, "we know that we can't let up the pressure to see this commitment through in a way that benefits drivers," said Rebekah Whilden, campaign representative with Sierra Club's Clean Transportation for All. "We need all hands on deck from companies to tackle pollution, combat the climate crisis, and commit to equitable labour standards."