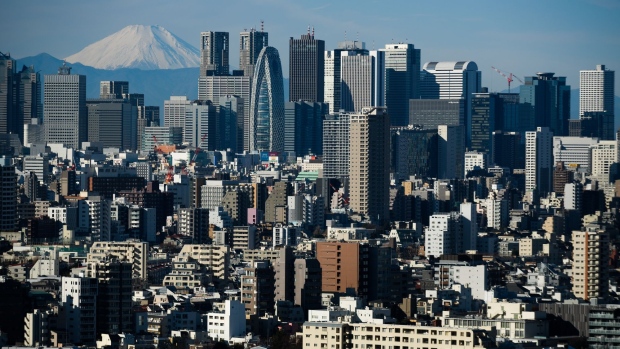 Mount Fuji stands beyond buildings in Tokyo, Japan, on Friday, Jan. 11, 2019. Japan’s key inflation gauge slowed in the first back-to-back decline since April, highlighting the difficulty of the Bank of Japan’s price goal ahead of its policy meeting next week. Photographer: Akio Kon/Bloomberg , Bloomberg

After six years in Japan, Uber Technologies Inc. is finally coming to Tokyo.

Starting Friday, users in the Japanese capital will be able to hail taxis using the Uber app, according to Tom White, who heads the company’s operations in the country. Uber is partnering with three local taxi operators to make 600 cars available primarily in the city’s central business district and the popular areas of Shinagawa, Akihabara and Asakusa.

The U.S. company has done things a little differently in the world’s No 3. economy, which has strict regulations covering ride-sharing. The San Francisco-based company has focused on growing its food-delivery business, which now encompasses about 25,000 restaurants in 20 prefectures. For rides, it’s built partnerships with taxi companies in provincial cities, including the popular tourist destinations of Kyoto, Osaka and Hiroshima. In Tokyo, its offering has been limited to black-car hires till now.

“We wanted to do it right, having learned lessons in smaller markets,” White said in an interview. “We are in a better position to not just offer a good service to riders, but also to have lasting relationships with taxi companies.”

In Tokyo, Uber is partnering with Hinomaru Limousine Co., Tokyo MK Corp. and Ecosystem and is in talks with more operators, White said. The goal is to extend coverage to all of the capital’s central districts by the end of the year. That brings the total number of Japanese cities where the service is available to 12.

Despite the regulatory challenges, Japan has only grown in importance for Uber. After years of costly battles, ride-hailing giants have struck deals to stay out of each other’s core markets. In 2016, Uber ceded China to Didi Chuxing in exchange for a stake in its former rival. It pulled out of Russia in a similar manner the following year, and sold its Southeast Asian operations to Grab in 2018. That left few reservoirs of untapped growth.

Despite being the second-largest taxi market in the world -- generating some US$50 billion in annual revenue -- most locals in Japan still hail a cab by flagging one down in the street. Apps are used for less than 5 per cent of the rides, White said. Others have also spotted the opportunity. Sony Corp., startup Japan Taxi and China’s Didi are among those that have rolled out competing taxi-hailing apps.

“We are very much still in the early days,” White said. “There is still tremendous opportunity in this market. And the success of Uber Eats shows that people are open to the brand.”