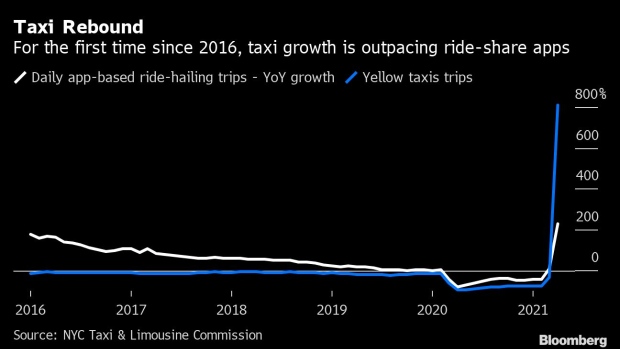 A driver shortage at Uber Technologies Inc. and Lyft Inc. has left city riders frustrated with high fares and long wait times, leading many to step off the curb and raise a hand.

“Business has been great. I’ve never seen it like this before,” said Tainur Rahman, a taxi driver from the Bronx. Rahman, who has been driving for about a decade, said he’s optimistic about a sustained rebound in the summer months to help make up for profits lost during the dead months of Covid-19 lockdowns.

Already suffering from an inundation of app-based drivers over the past several years, cabbies were dealt another significant blow by the pandemic, as commuters worked from home, tourists stayed away and no one wanted to be in the same car with a stranger. As New York’s economy is revving up again, the number of daily taxi trips in New York City surged more than 800% in April from a year earlier, while app-based platforms like Uber and Lyft jumped some 220%, according to the Taxi & Limousine Commission. That kind of demand, combined with the fact that there are only about one-third of the taxis on the street now compared with before coronavirus restrictions in the city took hold, can also make it hard to find one.

But it’s not just warmer weather and easing Covid-19 restrictions that have made people more comfortable hailing cabs the old-fashioned way.

Across the country, demand for ride-hailing has exploded, leaving Uber and Lyft scrambling to recruit drivers. Many have been slow to get back behind the wheel after finding other work or resorting to government stimulus benefits during the pandemic. With fewer drivers on the road, fares have steadily climbed since the beginning of the year, with a ride costing customers 40% more in April, according to research firm Rakuten Intelligence.

Donna Smiley lives in Washington Heights and commutes to work on the Upper East Side every morning. Since February, she’s been opting to take a taxi instead of ride-share due to the jump in fares.

“I don’t know why Uber and the other services jacked their prices up so much in the past few months,” Smiley said. Her morning Uber ride used to cost between $20 to $25, but now it’s no less than $30 and can reach almost $50 at peak times. It’s worse during the evening rush. “The cleaner, more comfortable cars of Uber are not worth the huge jump in pricing,” she said.

For cabbies, the app companies’ plight has been an opportunity for more business. It’s a bright spot for a beleaguered industry that has struggled to recover from a collapse in demand due to digital ride-hailing that deflated the value of taxi medallions and forced many cab drivers -- who were saddled with debt incurred to purchase permits -- into bankruptcy. In March, Mayor Bill de Blasio announced a plan to spend $65 million of the money New York City will receive from the federal stimulus package to help restructure the drivers’ loans. New York Attorney General Letitia James last year accused the city of committing fraud by artificially inflating the value of the medallions, which were sold at auction for more than $1 million in recent years before plummeting below $200,000 after the influx of app-based services.

But the taxi industry is still far from a full recovery. The number of yellow cabs in New York, which had been declining even before the pandemic, cratered at the height of quarantine. A year later, there are still only an average of 3,800 cabbies on the streets. Ride-hailing apps like Uber and Lyft still account for the vast majority of trips per day, six times as many as yellow cabs, according to data from the TLC.

“This doesn’t necessarily mean Uber and Lyft aren’t trying to charge more and capitalizing on this uplift in demand. They have full control over their dynamic pricing algorithm, which is known -- or at least speculated -- to be tweaked often and sometimes even manually,” he said. “I think most people in the industry expect things to stabilize fairly quickly as both customers and drivers return.”

Both Uber and Lyft said more drivers came back to the platform in May as a result of incentives. “With the economy bouncing back, drivers are returning to Uber in force to take advantage of higher earnings opportunities from our driver stimulus while they are still available,” an Uber spokeswoman said, adding that wait times in New York and Los Angeles -- two key markets -- have “significantly decreased.”

Part of the reason taxis have been able to capture more of the demand is because of platforms like Curb and Arro, which allow riders to flag a cab with ease through an app, or hail one with a hand and pay in the app. About two-thirds of taxis in New York are equipped with Curb’s technology, according to vice president of mobility Jason Gross, who said the app has become a competitive alternative to Uber and Lyft amid the longer wait times and increased surge pricing.

Yellow cabs adhere to city-regulated meters which take both time and distance into account and don’t have surge pricing. The basic fee is $2.50 and then about 50 cents per 1/5 mile, in addition to other potential fees, including a $2.50 congestion surcharge. In normal circumstances, taxi fares are about 5% to 10% cheaper than ride-shares, according to Gross, a differential he said has substantially widened in recent months.

Curb recently rolled out an upgrade that allows riders to see their fare upfront before e-hailing -- a relatively new feature for taxis. That has led to more mobile bookings, which are now double pre-pandemic highs, he said. Monthly downloads of the app grew 24% in May compared with pre-pandemic levels and daily active users jumped 33%, according to market research firm Apptopia.

Taxi drivers also see taxi apps like Curb as a modern improvement. For Brooklyn cabbie Mohammed Latif, Curb is a safeguard against passengers ducking out without paying their fare, because it’s linked to a credit card. Also, the steady flow of rides has made earnings more stable, he said. “I don’t just have to depend on people being outside waving me down.”

As the city’s economic rebound solidifies, there will likely be more jockeying for position among drivers and riders will aim to take advantage of a renewed competition.

Phillip Giambri, a Manhattan resident, recently opted to take a Lyft for $37 from LaGuardia Airport after Uber quoted him almost double the price. After waiting 15 minutes, he was told there were no drivers available. When he finally jumped in a taxi, it cost him only $28 to get home. “I’m disabled and rely on the car services but the prices are gonna put me back in yellow cabs.”