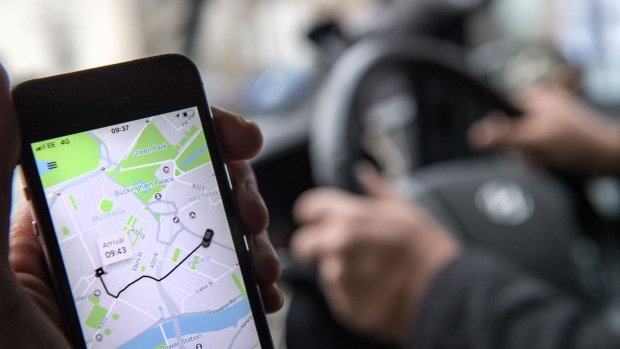 The Uber Technologies Inc. ride-hailing service smartphone app sits on a smartphone display during a journey in this arranged photograph in London, U.K., on Friday, Dec. 22, 2017. Uber will be regulated in European Union countries as a transport company after the bloc's top court rejected its claim to be a digital service provider, a decision that could increase legal risks for other gig-economy companies including Airbnb. , Bloomberg

(Bloomberg) -- Uber Technologies Inc. said it will increase rates across the UK, leading to an average 5% increase in London fares, as the ride-hailing company works to attract more drivers.

Prices will increase across the country by different rates depending on the city, Uber said in a statement on Monday. The aim is to draw 8,000 more drivers in London to meet demand in the capital.

A year ago, an exodus of Uber drivers led to a shortage of rides in London, with the people who’d previously worked for the app moving to courier jobs for the likes of Just Eat Takeaway.com NV or Amazon.com Inc. That year, Uber also spent heavily trying to lure drivers back following shutdowns from the Covid-19 pandemic, driving losses.

The GMB labor union took credit for negotiating the raise in a separate statement on Monday. Uber agreed to formally recognize the UK union last year following a landmark Supreme Court ruling in the country that forced the company to classify a group of its drivers as workers, and pushed it to grant similar vacation and minimum wage rights to all 70,000 of its drivers in the country.

The company said it’s attracted 10,000 drivers across the UK since it began providing vacation pay and pensions.