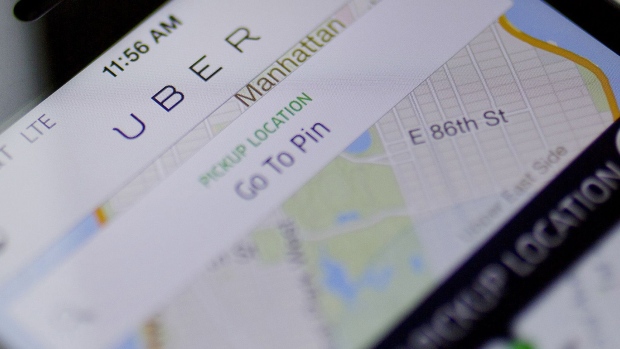 Uber Technologies Inc. generated more revenue from delivering food than transporting people for the first time last quarter, but it failed to offset a steep and prolonged decline in ridership brought on by the coronavirus pandemic.

Sales fell 29 per cent in the second quarter to US$2.24 billion, ending a decade of unchecked growth. The loss in the quarter also widened, but Uber maintained Thursday that it will achieve its goal of turning an adjusted profit by the end of next year.

Delivery revenue, which was growing even before the pandemic, surged 103 per cent during the quarter and is now central to Uber’s strategy. Along with a US$2.65 billion deal to acquire Postmates Inc. and expand its food delivery operations, Uber has begun delivering other items including groceries, prescriptions and packages. Uber now includes UberEats, its food delivery service, as part of the Delivery category.

“Delivery is clearly one of the major beneficiaries of Covid-19” bolstering UberEats as well as competitors GrubHub and DoorDash, said JMP Securities analyst Ron Josey in an interview.

But those same pandemic health restrictions that prompted customers to hunker down and order out froze travel in many of Uber’s most important markets. Mobility, Uber’s new category for rides and scooters, plunged 67 per cent to US$790 million in revenue. Ride demand has rebounded in cities like Hong Kong that have re-opened, but remains low in San Francisco, Los Angeles and other areas still struggling to contain the virus, Chief Executive Officer Dara Khosrowshahi said during a conference call to discuss the results.

He also said he hasn’t seen any signs there will be “permanent damage” to Uber as a result of the pullback, but declined to provide a date for a full global recovery.

Daniel Morgan, a portfolio manager at Synovus Trust Co., said given the number of retailers, schools and workplaces closed or at reduced capacity, transportation use will probably remain low for the foreseeable future. “Continued high COVID-19 case levels will likely weigh on ride-sharing demand throughout 2020 and into 2021,” he wrote in a note to clients.

In an acknowledgment of the long-term consequences of the pandemic, Uber said this week that its own employees could work from home until the end of June 2021. As the effects weigh on the business, Khosrowshahi has turned to cost-cutting. He eliminated about a quarter of the workforce in May and shuttered dozens of offices.

Uber even pared back its global food delivery operation by exiting more than a half-dozen markets to make room for expansion in more developed ones. After bidding unsuccessfully for Grubhub Inc., Uber agreed to buy Postmates last month in a bid to add more U.S. customers and become the third largest food delivery service in North America, according to SecondMeasure.

Although the company once trumpeted exotic projects like self-driving vehicles and helicopter rides, those businesses were scarcely mentioned in the company’s financial report, reflecting humbler ambitions and a focus on delivery and mobility.

In the quarter that ended in June, gross bookings from delivery doubled to $6.96 billion. Mobility, which is predominantly made up of ride-hailing but also includes scooter rentals, declined 75 per cent to US$3.05 billion. Many investors pay close attention to gross bookings to track the total value of spending with Uber. Analysts expected less from delivery and more from ride-hailing in the quarter.

The loss excluding taxes, interest and other expenses was $837 million. Analysts on average expected an adjusted loss of US$883 million, according to data compiled by Bloomberg. That loss didn’t include deductions related to restructuring, compensation or other charges during the quarter like Uber’s COVID-19 response. Uber spent $48 million during the quarter to reimburse drivers for the cost of purchasing their own protective gear and compensate drivers who were either diagnosed with the virus or quarantined because of it and couldn’t work.

“Q2 was a tough quarter, but I am just incredibly proud how the team executed,” Khosrowshahi said on the call. “I think that we pivoted in a big way.”

The company ended the quarter with US$6.8 billion in unrestricted cash, US$1 billion in short-term investments and equity stakes in Didi, Grab and Yandex totaling US$9.4 billion.

One dark cloud still lingering over Uber and other gig companies Lyft Inc., Instacart Inc. and DoorDash is the potential impact of reclassifying workers as employees. If Uber reclassifies drivers, ride prices would increase as much as 30 per cent in San Francisco and as much as 120 per cent in the less populated Inland Empire where demand is sparse, according to an analysis by Uber.

Uber was dealt setbacks over the last year in California, where the law is designed to give employee benefits to its workers, and New York, where courts have sided with some drivers. The states represent two of Uber’s largest markets.

Khosrowshahi didn’t directly address that threat to the company, focusing instead on the strength of a November ballot measure in California that would overturn the 2020 law.

“Time will tell whether or not the legislature or the voters and the courts agree with our position,” he said.

The number of people using Uber’s platform each month, a closely watched measure of engagement, shrank 44 per cent in the second quarter to 55 million customers, well below analysts’ expectations of a decline of about seven per cent. Shares sank about three per cent in extended trading after the financial report.