The disappointing outlook detracted from a milestone for the company. Uber reported its first adjusted profit in the third quarter, boosted by a recovery in ride-hailing and sustained demand in its delivery business. The shares fell as much as 6 per cent in extended trading.

Earnings before interest, tax, depreciation and amortization was US$8 million, compared with the US$15.4 million loss analysts expected. In September, Uber had said adjusted earnings would range from a US$25 million loss to a US$25 million profit for the third quarter.

When accounting for other expenses, though, Uber’s profits were nonexistent. It recorded a net loss of US$2.4 billion in the quarter. A writedown of its stake in China’s Didi Global Inc., previously reported by Bloomberg, drove the loss.

Revenue rose 72 per cent to US$4.8 billion, the San Francisco-based company said Thursday in a statement. That beat the US$4.4 billion analysts had projected, according to data compiled by Bloomberg.

Ride-hailing was among the hardest-hit sectors during the pandemic as people shunned activities that involved coming in close proximity with strangers. But rising vaccination rates and the economy’s reopening are re-igniting rider demand. Gross mobility bookings grew 67 per cent from a year earlier, driven in part by a rebound in airport rides, which surged 203 per cent from a year ago.

While riders are coming back, it’s been harder for Uber and Lyft Inc. to find enough drivers to meet that renewed demand, leading to higher fares and wait times for customers. Uber has spent hundreds of millions of dollars on incentives to lure drivers back after many resorted to government stimulus programs for income, sought work elsewhere or are reluctant to return because of health concerns.

“Our early and decisive investments in driver growth are still paying dividends, with drivers steadily returning to the platform, leading to further improvement in the consumer experience,” Chief Executive Officer Dara Khosrowshahi said in the statement.

Uber said the number of active drivers in the U.S. is up nearly 60 per cent compared with the same period last year. The company also scaled back spending on driver incentives in the third quarter, which contributed to it reaching profitability. 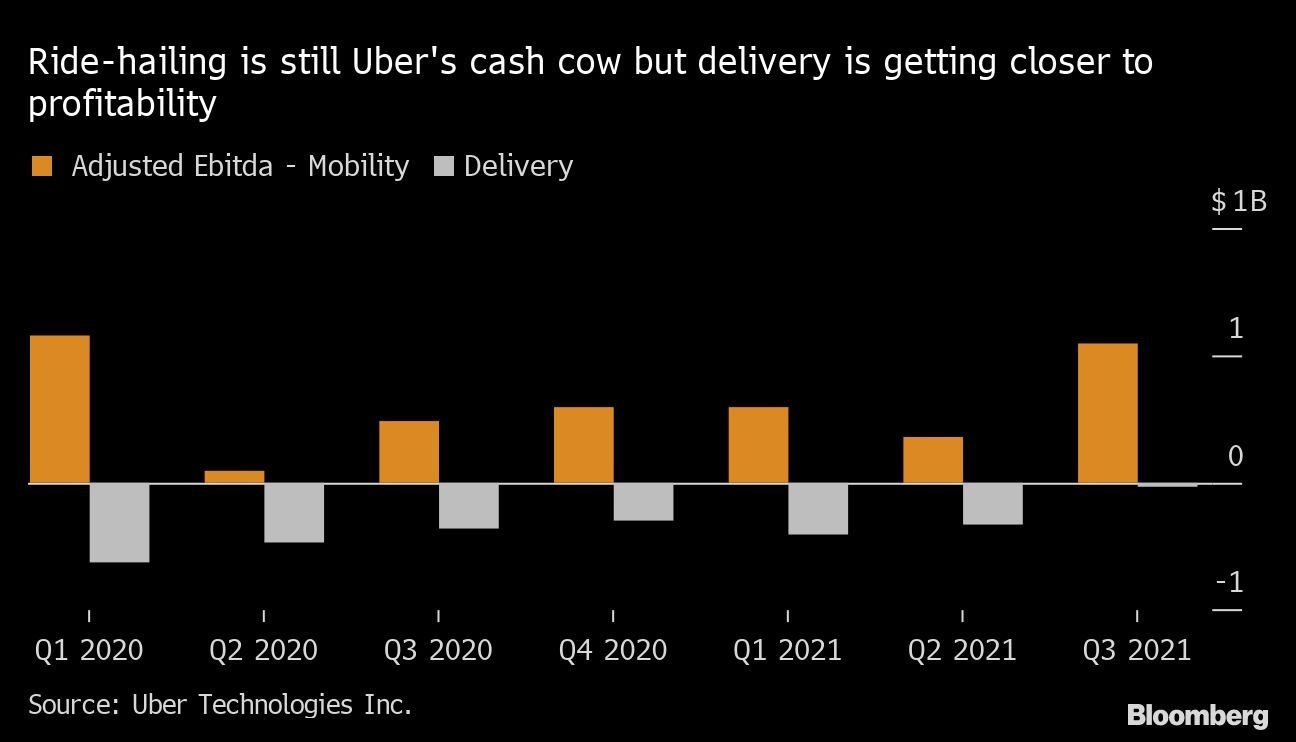 Lyft also has seen its prospects improve, reporting a 73 per cent increase in revenue in the third quarter. Co-founder and President John Zimmer said airport rides, which were up threefold from a year earlier, coupled with a rise in weekend and evening trips, were a positive sign that customers are reverting back to pre-pandemic habits.

Uber reported US$23.1 billion in gross bookings, which encompasses ride-hailing, food-delivery and freight, a 57 per cent increase from the same period last year, in line with estimates.

Unlike its rival Lyft, Uber was able to rely on its food-delivery business Uber Eats, which boomed during the pandemic just as ride share demand cratered. The delivery segment, which includes orders across restaurant, grocery and alcohol, has continued to grow despite indoor dining resuming, up 50 per cent from a year ago to US$12.8 billion in bookings.

While Uber’s delivery business as a whole is still not profitable, it significantly narrowed its losses by US$149 million from the second quarter, led by its core unit, Uber Eats. Its competitor in this sector, DoorDash Inc., has quickly gobbled up market share and refined its own unit economics for meal delivery since going public.

“Uber has to show that in addition to working toward being profitable that they can also maintain and grow market share against DoorDash,” said RBC Capital Markets analyst Brad Erickson.

Uber’s portfolio of investments is now worth US$13 billion. The Didi writedown represented an unrealized loss of US$3.2 billion, wiping out the US$1.4 billion it made after the Chinese ride-hailing giant went public in June. Other holdings, including Grab Holdings Inc., Aurora and Joby Aviation LLC, have also taken steps to go public.