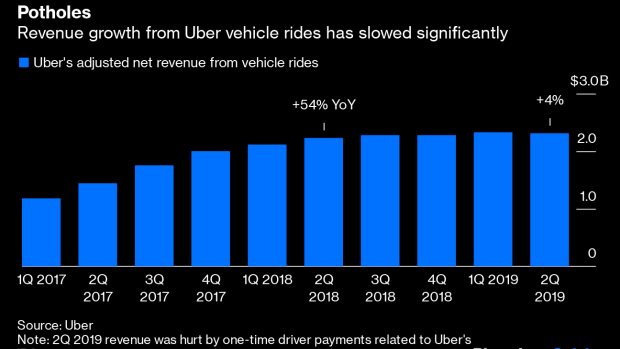 (Bloomberg Opinion) -- But why?

That’s the question I keep asking as Uber Technologies Inc. makes the case that driving people around cities gives it a leg up on moving physical goods from place to place — restaurant food, freight by truck and groceries.

Uber on Friday expanded those efforts by agreeing to buy a majority of Cornershop, which helps supermarkets, pharmacies and food retailers deliver their goods. It had operated mostly in Mexico and Chile before a recent expansion. Walmart Inc. agreed last year to buy Cornershop for $225 million, but Mexican regulators blocked the deal. Uber didn’t disclose its purchase price.

Uber’s pitch is that having drivers drop people at work or transport them on date nights gives it an opportunity to also deliver burritos, bananas or movie theater popcorn to people’s homes. (That last one is a real thing, somehow.) Executives have said that restaurant delivery and experiments with other categories such as groceries give Uber couriers more work, particularly outside of the peak demand for car rides.

This all sounds nice, until you think about it for more than five seconds.

Every time Uber wants to enter a new delivery or logistics category, it needs to strike relationships with a new class of companies. Restaurants are a finicky bunch, and so are grocery store chains or companies that want to ship goods by truck.

I have been stunned that Uber executives aren’t pressed to justify the strategic and financial efficiencies among their various businesses. On the consumer side of the equation, I may be more likely to order Uber Eats for dinner or grocery staples if I am used to taking an Uber car ride. But it’s not clear there is overlap on the supply side among ersatz taxi drivers, restaurants, grocery stores and other retailers.

Does Uber’s expertise in matching drivers with riders really help the company build or hook into point-of-sale systems for restaurant orders and make sure owners get the support they need? Can it help a grocery store with inventory management, staffing changes or other complexities when adding home delivery to a conventional physical store? Cornershop’s built-up experience in that area won’t go away, but neither is it clear whether Uber’s ownership will help.

Nor has Uber ever said whether the people driving passengers around are the same ones picking up restaurant orders or groceries for delivery. For one thing, in many big cities — including many of the ones that Cornershop serves — deliveries of food or groceries are done by motorbike or bicycle because that’s more efficient in traffic-clogged areas. Is that courier on a scooter delivering a sack of bread and milk in Mexico City one minute and then taking someone to the airport the next?

And it is difficult to imagine how the particulars of Uber’s model will ever make for an efficient grocery delivery operation compared with what more specialized players will offer.

Compare it, for example, with Ocado Group Plc, the British company that has been an early innovator in this space and will soon deploy its technology in the U.S. through a partnership with grocery behemoth Kroger Co.

Ocado’s delivery vans are designed for ferrying fresh food efficiently. Vehicles have separate compartments for items that must be kept chilled. Totes are loaded into them in a specific order based on the driver’s route. The heaviest totes are placed in the middle racks within the van, making it easier for the driver to unload than if they had to be pulled down from a high shelf or hoisted off the floor.

It defies logic that a fleet of contract workers at the helm of wildly different vehicles will be able to deliver grocery orders as productively. And that matters enormously for the profitability of these orders.

The big conundrum for Uber is it must keep expanding, even if it doesn’t work. Growth has significantly slowed in Uber’s core business of rides on demand, which makes it essential for the company to find fresh, higher-growth businesses. (That may explain why Uber shares are trading higher on the Cornershop news.) This was also a company predicated on having a global reach and for which car rides were billed as the start of a sprawling empire to move people or goods in every imaginable way.

Sprawl, growth and ambition are how Uber could justify a rapidly increasing valuation up to what investment bankers pitched as a possible valuation of $120 billion in an initial public offering. To put it mildly, Uber has not delivered. The share price has fallen about 33% since the IPO in May, and the stock is even below the level at which Uber sold shares in private transactions nearly five years ago. Ouch. The company has become a poster child for overinflated tech startups.

A big reason Uber has been a flop for investors is the company has not made an effective case for its financial viability — even in its most established category of car rides. So it’s odd that Uber would make forays into additional logistically tricky and financially uncertain categories such as groceries without having a better story to tell.

--With assistance from Sarah Halzack.