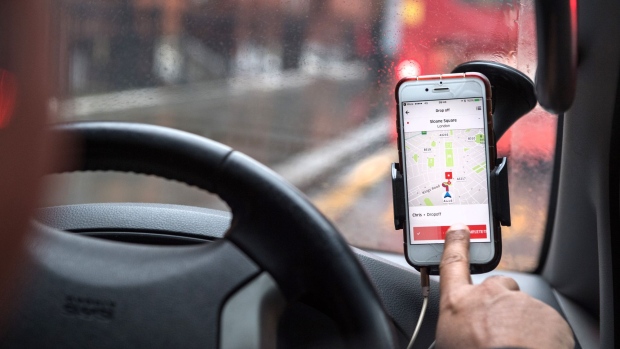 A driver uses the Uber Technologies Inc. ride-hailing service smartphone app to complete passenger drop-off in this arranged photograph in London, U.K., on Friday, Dec. 22, 2017. Uber will be regulated in European Union countries as a transport company after the bloc's top court rejected its claim to be a digital service provider, a decision that could increase legal risks for other gig-economy companies including Airbnb. , Bloomberg

Uber Technologies Inc. lost a bid to challenge part of a landmark ruling on the working rights of its drivers, meaning the ride-hailing app and its London rivals will have to overhaul their business models and assume more responsibility for each trip booked on their app.

U.K. judges ruled that the tech firm should enter into a direct contract with passengers when providing car journeys. Uber had sought clarity over comments made in a top court ruling given earlier this year.

Uber and others “will need to amend the basis on which they provide their services,” after the court concluded that “in order to operate lawfully, an operator must undertake a contractual obligation to passengers,” the judges said Monday. They also said London’s transport regulator will need to reconsider its current guidance to reflect the ruling.

The labor group that led the Supreme Court case, which forced Uber to reclassify its drivers as workers, says Monday’s decision will help prevent Uber and others from dumping risk on its drivers.

Uber said it will comply with the ruling, but that the judgment applies to every private hire operator in London, not just it.

“Every private hire operator in London will be impacted by this decision, and should comply with the Supreme Court verdict in full,” said an Uber spokesman.