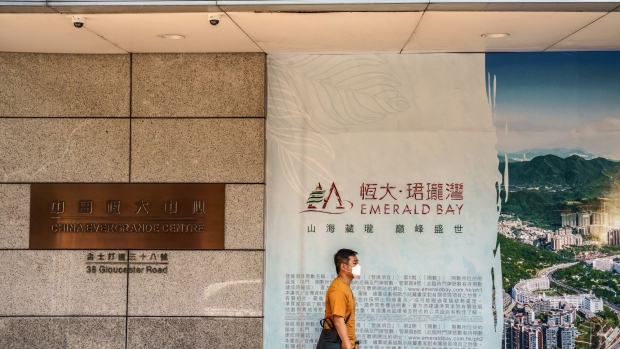 A banner promoting the Emerald Bay residential project outside the China Evergrande Centre in the Wan Chai area of Hong Kong, China, on Friday, July 23, 2021. HSBC Holdings Plc and Bank of China Ltd.’s Hong Kong unit are reconsidering their decisions to halt mortgages for China Evergrande Group's unfinished residential properties in Hong Kong, after the city’s de facto central bank questioned the moves, according to people familiar with the matter. , Bloomberg

(Bloomberg) -- UBS Group AG analysts who correctly predicted in January that China Evergrande Group’s stock would lose more than half its value now say the selloff has a lot further to run.

The Swiss bank slashed its 12-month target price to HK$3.5 ($0.45) from HK$6 while maintaining a sell rating, according to a research report led by analyst John Lam. The new target is 40% lower than Evergrande’s closing price on Monday.

The world’s most indebted developer has struggled to reassure markets about its financial health. Both equity and bond holders have been rattled in recent weeks by a slew of reports about wary banks and unpaid dues to suppliers. Evergrande’s credit rating was cut by S&P Global Ratings late Monday, the third downgrade by an international agency in about a month.

UBS declined to comment. Evergrande didn’t immediately respond to a request for comment out of business hours on Tuesday.

With 77% of Evergrande’s liabilities due within 12 months, the developer may continue to cut property prices to stimulate pre-sales, which will substantially erode earnings and margins, the UBS analysts wrote. Evergrande’s total liabilities -- which includes commercial bills and other short-term payables -- grew to a record 1.95 trillion yuan last year, even as the company reduced its pile of interest-paying debt.

Evergrande shares closed 13.4% lower on Tuesday after the company surprised investors by deciding against a special dividend. The closing price of HK$5.8 was the lowest since March 2017.