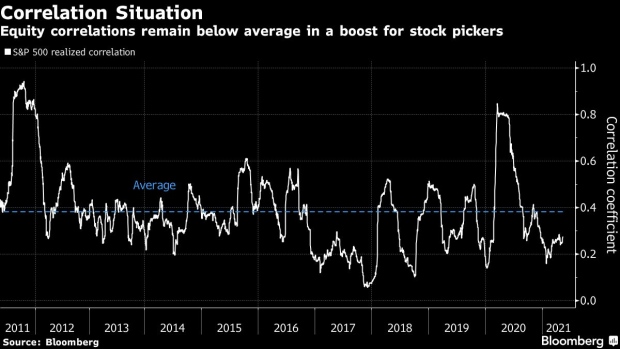 (Bloomberg) -- With the global inflation debate intensifying, equity investors are fine tuning their portfolios to guard against the impact of price pressures.

A preference for companies with the greatest pricing power is one approach adopted by investors from JPMorgan Asset Management to Pictet Wealth Management. While cyclical stocks remain in favor, fund managers are becoming more selective, as pockets of the economically-sensitive asset class may have run too far, too fast.

“You hide in pricing power companies -- those companies that will be able to pass higher raw material costs and wages to the end customer,” said Cesar Perez Ruiz, chief investment officer at Pictet Wealth Management in Geneva. “Luxury, concessions companies linked to inflation are some of the sectors that will benefit, but even some cyclical or commodity companies have now more pricing power than several years ago too.”

A jump in U.S. consumer prices in April by the most in a decade has intensified an already-heated debate about how long inflationary pressures can last. Higher-than-expected factory prices in China last month and the surge in commodity prices, have added to the concerns.

The worries have begun to weigh on stocks. MSCI Inc.’s global equity benchmark slipped 1.6% this week, its biggest drop since February. Technology shares bore the brunt of the weakness as investors bet the return of inflation will bring with it higher interest rates that could hurt stocks with elevated valuations.

Stocks like U.S. railroad companies and paint manufacturers have historically been good at passing on price pressures, though usually with a time lag, according to Richard Saldanha, a portfolio manager at Aviva Investors.

Yet there are differing views about how much this applies right now.

“Consensus believes that cyclical areas such as banks and industrials are the place to hide in an inflationary environment,” said Caroline Keen, a portfolio manager of JPMorgan Global Growth Fund. “We would counter that banks are generally not price setters and many industrial companies such as autos are struggling with cost increases, with an inability to pass these on to consumers.”

Cyclical names are also getting more expensive. Banks now trade around 1.1 times their book value, above the sector’s 10-year average, according to data compiled by Bloomberg. The equivalent for materials stocks is even more extreme after recent surges in commodities like copper and iron ore.

That has made UBS Asset Management portfolio manager Max Anderl “slightly wary” of classic inflation hedges like financials or miners after a strong rally this year. “We prefer to look at selected stocks in the IT and media sectors that continue to show exceptionally strong fundamentals but have corrected sharply in this factor rotation,” he said.

Ricardo Gil, head of asset allocation at Trea Asset Management in Madrid, has chosen to exit industrial shares in favor of oil stocks and some banks.

Another approach is to sidestep the debate altogether and focus on single stock ideas or non-inflation related investment themes.

With reflation bets triggering a sector rotation, equity correlations are falling, which is good news for fund managers looking to beat indexes through stock picking. If most equities are moving in different directions, it’s easier to choose one that stands out from the crowd.

The S&P 500 Index’s three-month realized correlation -- a gauge of how closely the top stocks in the U.S. benchmark move relative to each other -- remains well below the average of the last 10 years.

“Our way to cope is being overweight in equity alternatives such as Merger Arbitrage and CTAs and focus on idiosyncratic ideas rather than broader sectors,” said Bantleon AG portfolio manager Oliver Scharping.

Still, not everyone believes the world is set for a new era of higher prices and JPMorgan’s Keen isn’t making significant changes to her portfolio despite the recent inflation concerns.

The portfolio manager sees inflation as transitory due to year-over-year base effects and temporary supply chain bottlenecks and is conscious of structural deflationary forces that remain in place such as technology, high debt levels and poor demographics.

“Loan growth remains muted and fiscal stimulus comes with offsetting tax increases,” Keen said. “So far we have seen no evidence to suggest that we are entering a new inflationary regime.