The Risks of the Federal Reserve at a Turning Point

“I’d be very, very careful about growing further the balance sheet of central banks,’’ Sergio Ermotti said in a Bloomberg TV interview on Tuesday, ahead of the European Central Bank’s policy decision this week. “We are at a risk of creating an asset bubble."

With global growth slowing, central banks have been forced to reverse course after spending much of last year leaning toward tightening monetary policy. Federal Reserve Chairman Jerome Powell and his colleagues look primed to cut interest rates by a quarter percentage point later this month, and the ECB is also on the verge of more stimulus.

For investors, the about-face has fueled an “everything rally” lifting both risk-on and risk-off assets. The Stoxx Europe 600 Index advanced 13 per cent in the first half of the year, the best return in the six-month period since 1998. Bonds have also soared on the intense thirst for yield spurred by dovish monetary bets and a growing pile of negative-yielding debt.

While notoriously hard to spot before they burst, potential bubbles may now be forming in the global bond market, where US$13 trillion of debt is offering negative yields, the US$1.3 trillion U.S. leveraged loan market and property in hot spots such as New Zealand and Canada.

The Fed’s Powell has suggested that the last two U.S. economic expansions ended not because inflation got too high but because asset markets got too frothy. In 2000, it was stock prices, especially those of high technology companies, and in 2007, it was house prices. 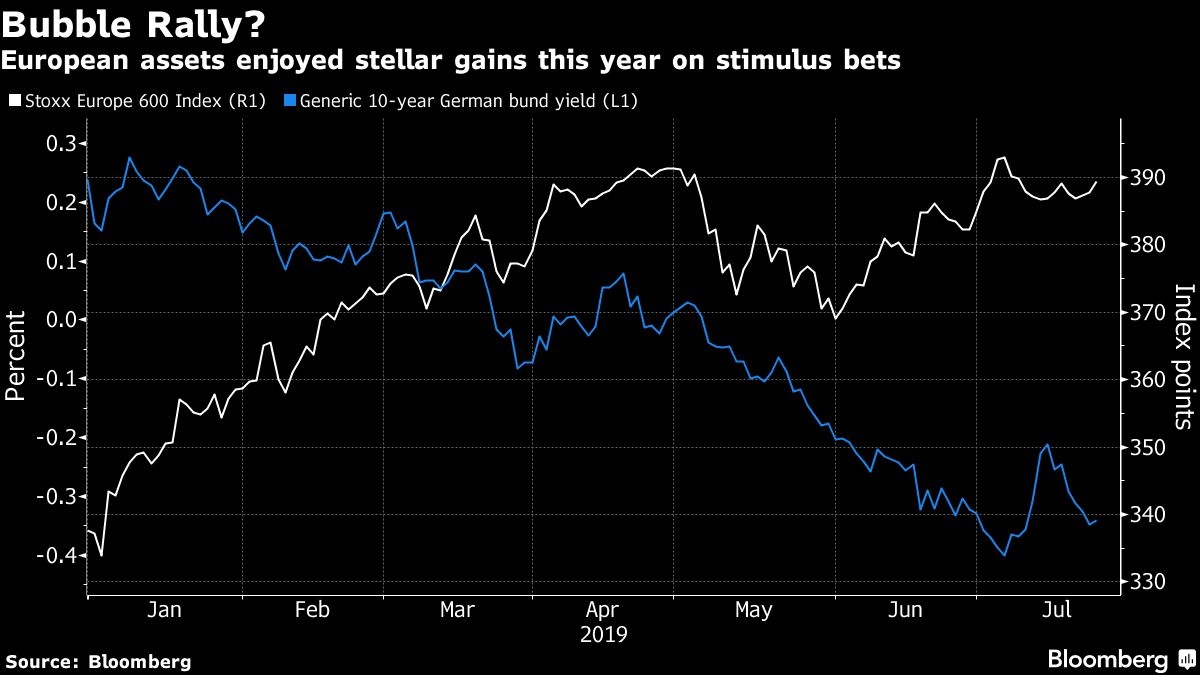 “Asset prices went up but it’s not really correlated with investor sentiment, which is in my point of view, of course, a very dangerous development,” said Ermotti.

The CEO joined Wall Street peers in warning that the reversal in interest rate expectations will also weigh on income from lending. Banks depend on clients paying to borrow money, but as interest rates head to zero or lower, their margins are being compressed. The problem is particularly pronounced in Europe, where lenders have been dealing with negative rates for half a decade, with an end looking increasing far off.

No president has attacked the Fed in the way that Trump has: Harvard professor

Jeffrey Frankel, professor at Harvard University's Kennedy School of Government, discusses the dynamics between U.S. President Donald Trump and the U.S. Federal Reserve. He explains how Trump has broken all precedents by personally targeting the Fed over social media.

While UBS on Tuesday posted its strongest second quarter in almost a decade, income from lending at the key wealth management unit declined. Deutsche Bank AG earlier this month unveiled its biggest overhaul in recent memory, in part because negative interest rates give it little to fall back on as trading in the investment bank dries up. The lender is scheduled to report earnings on Wednesday.

Subdued inflation expectations mean money markets are pricing in a 40 per cent chance of a 10-basis-point rate cut at Thursday’s ECB meeting. Investors also reckon the monetary authority is poised to restart its asset-purchase program this year -- intensifying the hunt for yield across risky assets. Net bond purchases by the Fed, ECB and Bank of Japan will swing back above zero from September, according to an analysis of their balance sheets by Bloomberg Economics.

For money managers with US$489 billion between them, fears of monetary-policy impotence are now second only to tariff negotiations on their list of biggest tail risks, according to Bank of America’s July survey.

Many traders have remained on the sidelines of this year’s rebound in risk assets as they fear the U.S.-China trade spat could curb profits and stall global growth. Ermotti said client cash balances remain “very high.”

“What they say is that they’re willing to step into the market if there’s a major correction,” he said.

--With assistance from Simon Kennedy, Paul Dobson and Sid Verma.