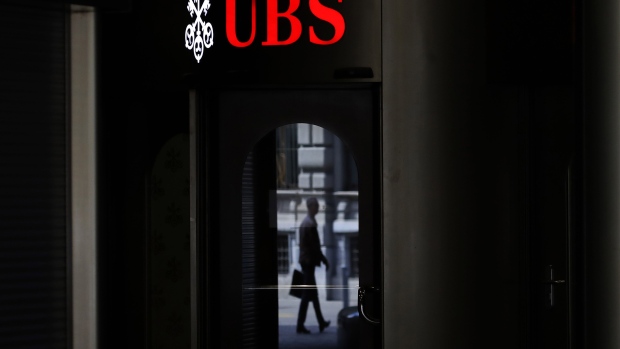 A pedestrian is reflected in a door of a UBS Group AG bank branch in Zurich, Switzerland, on Friday, April 17, 2020. A UBS appeal of a record 4.5 billion-euro ($4.9 billion) French fine for helping clients stash undeclared funds in offshore accounts was postponed over concerns related to coronavirus pandemic, according to people familiar with the case. Photographer: Angel Garcia/Bloomberg , Bloomberg

(Bloomberg) -- A share sale that kicked off this week may catapult UBS Group AG to the No. 2 spot for equity offerings in Australia and New Zealand, surpassing its peers Goldman Sachs Group Inc. and JPMorgan Chase & Co.

The Swiss bank is in line for a 17.6% market share of equity and rights offerings in the region this year after it alone managed a A$2 billion ($1.4 billion) equity raising for Sydney Airport, according to Bloomberg League Tables. It trails behind only Macquarie Group Ltd. which will account for 18.2% of the market. UBS was ranked fourth before the deal, which was Australia’s second biggest share sale this year.

Sydney Airport has sold 287 million new shares to institutional investors, raising about A$1.3 billion, it said in a statement on Friday. Another A$700 million of shares will be offered to retail investors, according to the statement. Bloomberg’s calculations assume that the combined institutional and retail portions will raise about A$2 billion, as expected.

The deal is smaller than the A$3 billion raised by National Australia Bank Ltd. in April, but larger than all others to date including Qantas Airways Ltd.’s A$1.4 billion offering in June.

Like Qantas, Sydney Airport has been slammed by low passenger numbers as a result of pandemic containment measures. The company plans to use the proceeds to cover maturing borrowings and reduce net debt of A$7.1 billion after reporting a half-yearly loss of A$53.6 million.

For UBS, the deal comes at a time of disruption for the bank in Australia, following a string of departures that began with former Australasia head Matthew Grounds in 2019. Aidan Allen, who looked after the investment banking business for Australia, has also left. A representative for UBS declined to comment.

The Swiss bank has accomplished a turnaround in Europe where it has rapidly ascended the league table for mergers and acquisitions work, on track for the highest ranking in a decade. In Hong Kong, UBS rebounded from a ban last year on sponsoring initial public offerings and secured its highest market share in seven years.