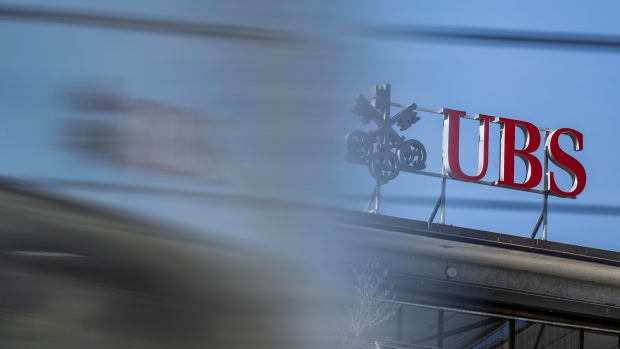 A sign on the roof of a UBS Group AG office building in Zurich, Switzerland, on Tuesday, April 19, 2022. UBS increased pay for junior bankers in the U.S. for a second time in less than a year, bringing the Swiss lender in line with Wall Street rivals trying to stem defections amid a race for talent. Photographer: Pascal Mora/Bloomberg , Bloomberg

(Bloomberg) -- UBS Group AG’s underwriting arm has been left out of the group that is poised to handle the biggest-ever municipal-bond transaction from Texas after the state listed the bank as one of the firms it considers to “boycott” the fossil-fuel industry.

Board members of the issuer, the Texas Natural Gas Securitization Finance Corp., announced a newly configured underwriting syndicate for the $3.4 billion transaction without UBS at a meeting on Thursday, according to Lee Deviney, executive director of the Texas Public Finance Authority, the state agency overseeing the sale.

Underwriters on the deal were initially approved in May by the issuer, and UBS was among them. But then UBS Group was included on a list published on Aug. 24 by Texas Comptroller Glenn Hegar, a Republican, along with nine other companies he deemed to be hostile to the energy industry. The release of the list followed a months-long probe his office conducted into companies’ energy policies to determine whether they were shunning the oil and gas industry in favor of sustainable investing and financing goals.

A spokesperson for UBS in New York didn’t have an immediate comment.

The loss of the deal is a blow for the Zurich-based bank’s US municipal-bond business. Laredo, Texas, dropped the firm from a $119 million revenue-bond transaction in August, and the bank withdrew from a Kerrville, Texas, bond sale that month, according to the city’s finance director.

UBS is the 20th-biggest underwriter in the Texas muni market this year, down one slot from the same period a year ago, according to data compiled by Bloomberg.

The bank was the only US muni underwriter included on the Texas comptroller’s list of so-called boycotters. A Texas law enacted in 2021, Senate Bill 13, bars the state and its local governments from entering into contracts of $100,000 or more with companies unless the firms verify that they don’t boycott the energy industry.

In Texas, most municipal-bond transactions have to be approved by the state’s attorney general, Republican Ken Paxton, before deals can close, and the inclusion of UBS on Hegar’s list may have disrupted that clearance.

The $3.4 billion transaction will raise money to bail out natural gas utilities stung by financial losses from the deadly storm that struck the state in February 2021. The financing is designed to spread out the sky-high energy costs over decades to avoid burdening residents with abnormally high energy bills.

The transaction could price as early as Nov. 9, Paul Jack, an Estrada Hinojosa & Co. financial adviser working on the deal, said at a Texas Public Finance Authority board meeting this week.

“We would probably avoid pricing the first week in November which is an FOMC meeting week,” which suggests a pricing window shortly after the November election, Jack said at the meeting, according to a recording of the session provided by Deviney, the Texas Public Finance Authority official.

(Updates with potential timing of sale and UBS underwriter ranking.)