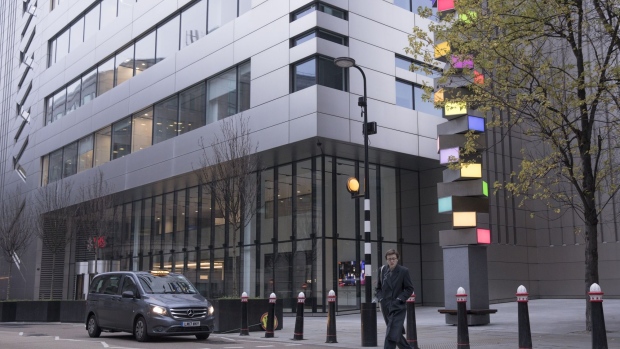 A pedestrian walks past the UBS Group AG U.K. headquarters in the City of London, U.K. on Monday, Dec. 7, 2020. As the U.K.'s second lockdown, lifts City of London firms are likely to let more workers return, giving a boost to businesses in the financial district before Christmas. , Bloomberg

The silver building’s current owners Hong Kong-based CK Asset Holdings Ltd. started initial discussions with a handful of potential buyers earlier this year, Bloomberg reported at the time. NPS, working with LaSalle, was the winning bidder for the site at 5 Broadgate, according to people familiar with the matter, who asked not to be identified because the deal is private.

The Hong Kong-based company run by Victor Li, who succeeded his billionaire father Li Ka-shing in 2018, bought the property that year for 1 billion pounds and would only accept offers in excess of that amount, people familiar with the early discussions said in June. UBS moved into the building after its completion in 2015 from a series of smaller offices on the Broadgate campus.

Demand for trophy London office buildings with long leases has held up during the pandemic even as firms continue to juggle how to manage the return to office life. British Land Co., which developed the property, said last month that it has seen a boom in activity this year for new office space.