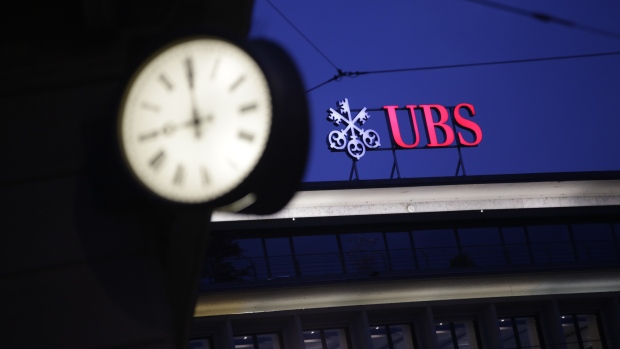 A sign sits illuminated on the roof of the UBS Group AG headquarters in Zurich, Switzerland, on Monday, May 2, 2016. , Bloomberg

UBS had proposed a pay package that included 14.1 million francs ($14 million) in compensation for Chief Executive Officer Sergio Ermotti for last year. While that’s down slightly from the 14.2 million francs he received in 2017, executive pay generally at UBS “appears consistently above peers,” Glass Lewis said in an emailed report.

“On balance, we do not believe shareholders have been presented with sufficient evidence of a link between pay and performance,” Glass Lewis wrote. “Shareholders could have reasonably expected the board to use its discretion to adjust variable compensation to reflect the shareholder experience.”

Ermotti has come under pressure as shares of the lender declined 32 percent last year and the bank was ordered to pay a record $5 billion in a French tax scandal. Last month, the CEO stunned investors by saying that conditions in the first quarter were the toughest in years, forcing the bank to slow down hiring and deepen cost cuts.

Glass Lewis also criticized compensation at cross-town rival Credit Suisse Group AG, telling investors earlier that they should reject that bank’s compensation report as well. A pay increase by 30 percent for CEO Tidjane Thiam was “unjustified” even after he delivered Credit Suisse’s first annual profit in four years. At 12.7 million francs, Thiam would still be making less than Ermotti.

To contact the editors responsible for this story: Dale Crofts at dcrofts@bloomberg.net, Christian Baumgaertel, Keith Campbell