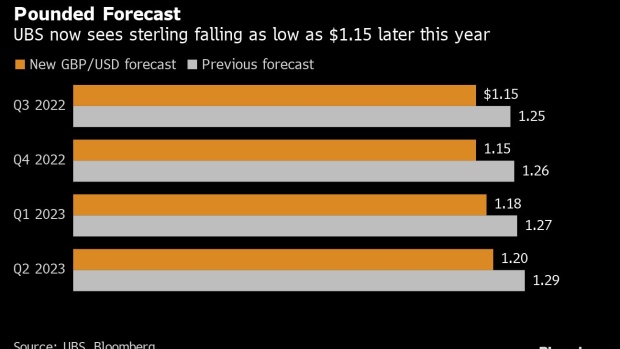 Skyscrapers in the Canary Wharf business, shopping and financial district through the steel girders of a non-operational gasholder on the Old Kent Road in London, UK, on Friday, May 27, 2022. Britain is in talks to reopen its biggest natural gas storage site as the war in Ukraine threatens to deepen the nation’s energy crisis this winter, according to people familiar with the matter. Photographer: Chris Ratcliffe/Bloomberg , Bloomberg

(Bloomberg) -- The pound will slump to historic lows this year as Britain suffers a winter gas crisis, UBS Group strategists are telling their millionaire clients.

They have slashed a forecast for the UK currency to $1.15 in the October-December quarter, down from $1.26 previously. That would nearly match the trough hit when the pandemic rattled global markets in 2020, and sterling has only been lower than that in 1985.

It’s a bold and contrarian call, given most analysts see the currency holding its ground at around $1.22 into the end of the year as the Bank of England lifts interest rates. The UBS analysts think even the biggest hike in nearly three decades on Thursday won’t give sterling a lasting boost.

“We expect GBP/USD to come under pressure this year,” said Thomas Flury, head of currency research at UBS Wealth Management, and Dean Turner, UK economist at UBS Private Banking, in a note. “The euro zone and the UK are both likely to suffer energy supply shortages this winter.”

That view assumes the war in Ukraine carries on and Russia continues to use energy exports as a means to increase pressure on Western countries. Energy bills in the UK are expected to jump further in October, adding to inflation and exacerbating a cost-of-living crisis.

It’s a problem that’s already slowing the country’s economic growth and risks tipping it into a recession as the central bank lifts borrowing costs steeply. Candidates for a new prime minister to replace Boris Johnson in September are competing to offer tax cuts or greater borrowing to get out of the situation. That won’t stop energy prices.

“The political situation in the UK, with the lengthy search process for a new government, is also limiting sterling’s appreciation potential,” the UBS analysts said.

The gas supply risks are seen pushing both sterling and the euro lower against the dollar, leaving the euro-pound pair trading broadly sideways around 0.85 through June 2023, they added, compared with around 0.84 now. They expect the pound to recover against the dollar next year, to $1.18 in the first quarter and $1.20 by June.