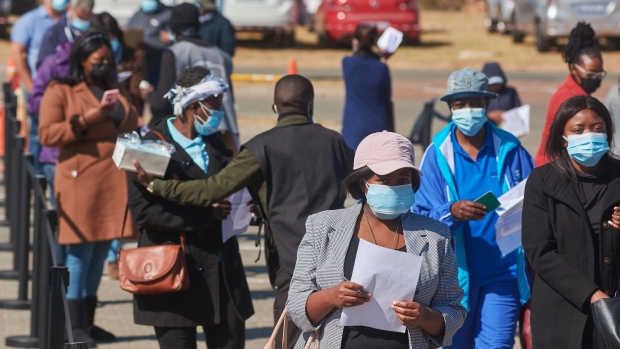 Residents wait in line to register outside a Discovery Ltd. mass vaccination site in the Midrand district of Johannesburg, South Africa, on Thursday, July 8, 2021. A third wave of coronavirus cases in South Africa’s commercial hub of Gauteng may have peaked after daily infections surged to a record last week. Photographer: Waldo Swiegers/Bloomberg , Bloomberg

(Bloomberg) -- Uganda has added herbal remedies to treatments it recommends for the coronavirus even before concluding clinical trials as it battles a surge in cases driven by the delta variant.

The government gave five acres (two hectares) of land to Jena Herbals Ltd. to immediately build a factory and ramp up production of its Covidex product, the Uganda Investment Authority said Wednesday. The substance contains extracts of berberine and zanthoxylum gilletii plants used as supplements and treatments of viral ailments. Gulu University in northern Uganda is expecting 3.7 billion shillings ($1 million) from the national treasury to support the development of a different solution called Covilyce.

Government has moved to support clinical trials on the herbal remedies to obtain reliable data on the efficacy, Science, Technology and Innovation Minister Monica Musenero said in an interview last week.

Africa, where about 1.3% of the 1.2 billion population are fully inoculated, is struggling to get more vaccines, and the Africa Centres for Disease Control and Prevention has said 20 nations face a severe third wave of the disease. That’s helped herbal solutions gain popularity in Uganda, where the variant first identified in India has fueled infections.

The number of confirmed Covid-19 cases in Uganda has more than doubled, while the death tally climbed more than six-fold since May 26, according to data from the Health Ministry. Cases so far stood at 91,162 and 2,425 deaths on July 19.

Production of Covidex reached 30,000 20-milliliter units daily after the National Drug Authority in June approved it for supportive treatment of viral infections. Patrick Ogwang, the scientist behind Covidex, said his Jena Herbals plans to more than triple production within months. The drug acts by supposedly preventing virus growth and has anti-inflammatory effects, according to information on the website of a Covidex distributor, Rocket Health.