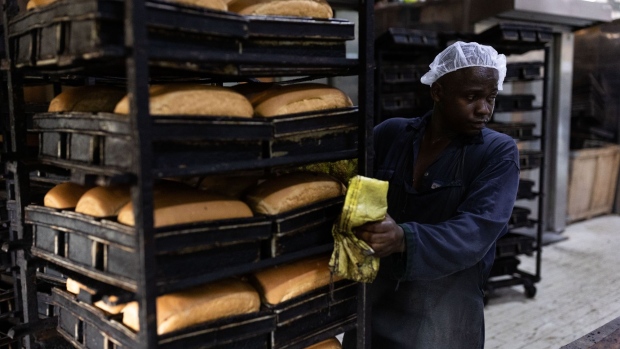 KAMPALA, UGANDA - JUNE 14: A baker makes bread, made from wheat flour, at a bakery on June 14, 2022 in Kampala, Uganda. This factory, one of the largest in the country, bakes around 300,000 loafs of bread a month and has had to raise prices in response to the wheat price increasing. The company also produces flour, which it currently sells at UGX168,000/50kg, up from UGX138,000 two weeks ago, and expects to raise prices again in a few weeks to UGX190,000. Around half of Uganda's wheat imports come from Russia and Ukraine, where production and export have been diminished by the ongoing war. (Photo by Luke Dray/Getty Images) , Photographer: Luke Dray/Getty Images Europe

The Bank of Uganda said it will hold a special monetary policy committee meeting on Tuesday, days after the release of a report showing core inflation exceeded the central bank’s 5% medium-term target for a second straight month. Annual core inflation, which strips out the more volatile food and energy component, accelerated to 5.5% in June, from 5.1% a month prior, and headline price growth quickened to 6.8% from 6.3% in May.

The MPC usually convenes every two months. At its most recent meeting on June 2, it increased the rate for the first time since October 2018 to counter accelerating inflation and support the weakening shilling. A bank spokeswoman wasn’t immediately available for comment.

“Assuming there is a rate decision tomorrow, then I would expect a 50 to 100 basis point increase,” said Benoni Okwenje, general manager of financial markets at the Kampala-based Centenary Bank. “This would be in response to the rising inflation. The deputy governor at a recent event made it very clear that BOU will continue to increase CBR as long as inflation is above their 5% target”

The central bank joins nations such as India that have held unscheduled meetings since the war in Ukraine caused already high food and fuel prices to increase even further, and rising interest rates in the US and other developed nations led to a sell-off of emerging market currencies by investors seeking higher yields.

Gasoline prices rose 46% in June from a year earlier and diesel 65%.