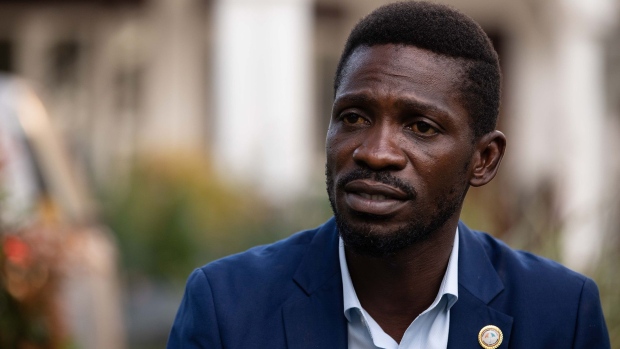 KAMPALA, UGANDA - JANUARY 15: Bobi Wine addresses the media as security forces surround his home on January 15, 2021 in Kampala, Uganda. Wine alleged that the forces beat a member of his staff shortly before the media arrived. A uniformed solider also pointed a cocked rifle at members of the media. Pop singer turned politician Bobi Wine is challenging sitting President Yoweri Museveni who is seeking his sixth term in office after 35 years in power. (Photo by Luke Dray/Getty Images) , Photographer: Luke Dray/Getty Images Europe

(Bloomberg) -- Ugandan opposition leader Bobi Wine plans to withdraw a court petition against President Yoweri Museveni’s election win after saying he was concerned about the composition of the judicial bench named to hear it.

Bobi Wine instructed his lawyers to formally withdraw the lawsuit and they are “going to work on it,” lead lawyer Medard Sseggona said Monday by phone from the capital, Kampala, and declined to give details. The pop star, whose real name is Robert Kyagulanyi, was the runner-up in the Jan. 14 election.

Kyagulanyi, 39, told reporters last week that one of the judges in the case was previously the president’s lawyer while another was a former Museveni aide. The lawsuit filed earlier this month alleged massive fraud in the re-election of Museveni, who won a sixth consecutive term by about 58% of the vote.