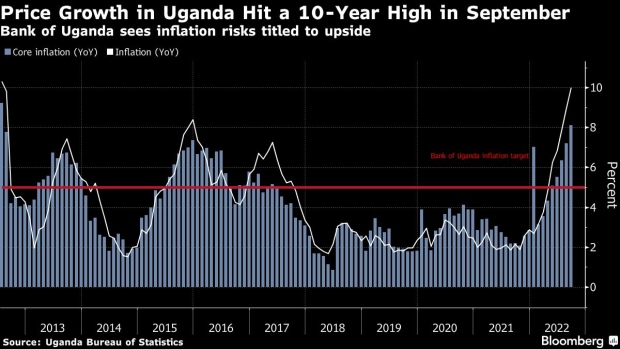 Uganda’s central bank raised its key interest rate to the highest level since 2019 and signaled more hikes are ahead unless rampant inflation is brought under control.

The monetary policy committee increased the benchmark rate for a fourth straight meeting to 10% from 9%, Deputy Governor Michael Atingi-Ego told reporters Thursday in the capital, Kampala. That takes cumulative rate increases since June to 350 basis points, making it one of six central banks on the continent that have hiked by 3 percentage points or more this year.

“The Bank of Uganda remains determined to rein in on inflation and will continue to undertake the necessary measures to restore inflation to its target of 5% in the medium term,” Atingi-Ego said.

Annual core inflation, which strips out food and energy costs, has been above the central bank’s 5% medium-term target since May and at 8.1% is at the highest level in a decade. Headline price growth quickened to 10% in September from 9% in the previous month.

The MPC sees headline inflation averaging 7.3% in 2022 and in a range of 8% to 10% in 2023, before declining back to the target in 2024, Atingi-Ego said. Inflation pressures are forecast to peak in the first half of next year as Covid-19 effects wane and supply-chain bottlenecks ease and because of recent monetary and fiscal policy actions that have stabilized the exchange rate, he said.

The outlook for price growth is highly uncertain with the balance of risks still titled upwards, Atingi-Ego said.

Absa Group Ltd. analysts Mpho Molopyane, Ridle Markus and Tlhologelo Thoka said in a research note that they expect the MPC to raise borrowing costs by 100 basis points in December, as they forecast annual inflation will accelerate further, likely ending the year at 10.8% and peaking in the first quarter of 2023. Another hike of 50 basis points in February 2023 is likely considering the MPC’s later forecast for when inflation will peak, the analysts said.

The decision aligns the Bank of Uganda with rate setters across the world that are raising borrowing costs at the fastest pace in a generation to remain in sync with the US Federal Reserve in smothering inflation, even at the expense of economic growth and attracting investors to strengthen their currencies and reduce import costs.

Uganda is one of the few central banks whose inflation-adjusted interest rate is at zero.