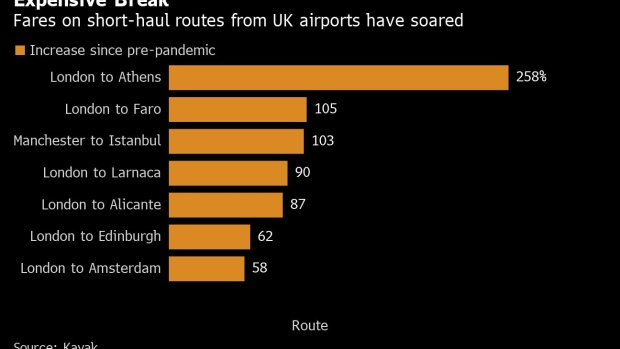 (Bloomberg) -- Britons booking a break in some of Europe’s most popular holiday destinations this summer are seeing airfares climb by almost a third amid booming demand, high oil prices and curbs on airline capacity.

Fares in the first week of August, the peak month for UK travel, were up 30% on average for the top 36 routes compared with pre-pandemic levels, according to data compiled by online travel agency Kayak.

Short-haul trips are typically priced 40% higher as the end of the school year triggers a mass exodus of families, many headed abroad for the first time in three years. Flights from London to Athens and Faro in Portugal’s Algarve lead the way, selling for more than double the cost in 2019, with services to Larnaca, Cyprus, and Alicante on Spain’s Costa Blanca costing around 90% more.

While pent up demand is continuing to drive bookings, passengers have been subject to weeks of upheaval after labor shortages and a wave of strikes at airlines and airports triggered a spate of last-minute delays and cancellations.

Curbs on short-haul schedules subsequently imposed at UK hubs such as London Heathrow, Gatwick and Manchester and continental rivals including Amsterdam and Frankfurt have further limited seat supply and pushed up fares, allowing airlines to turn a profit even as customers endure continuing disruption.

Ryanair Holdings Plc, the region’s biggest discount airline, has said that the surge in July and August prices may also extend holiday bookings beyond the traditional school break and into September and October.

Fares are also higher on long-haul routes. Prices for travel to destinations in the Asia-Pacific and Middle East were up most as of early August, led by a doubling of prices from London to Bangkok, with the average hike about 20%. Asian capacity has previously been held back by lingering coronavirus curbs.

US cities trended flat, having been among the biggest gainers a week earlier, most likely because August 2019 fares were also high.

Business bookings that have lagged behind the leisure rebound are picking up strongly, though Jean-Christophe Taunay-Bucalo, chief revenue officer at TravelPerk, which specializes in corporate travel, says levels of seat supply in the segment represent “a little bit of a joker.”