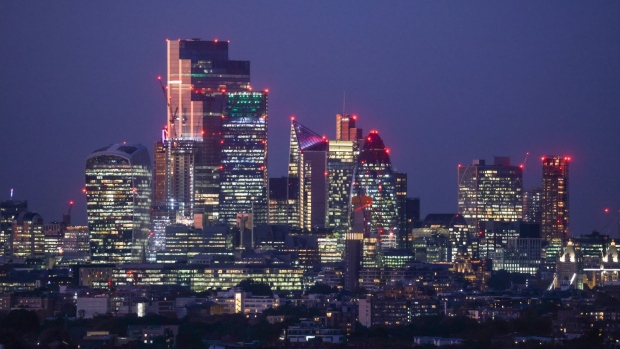 Skyscrapers and buildings on the City of London skyline at dusk in London, U.K., on Thursday, Oct. 21, 2021. U.K. Prime Minister Boris Johnson said the City of London will prosper outside the European Union, noting job losses and disruption to capital flows have been lower than feared. Photographer: Chris Ratcliffe/Bloomberg , Bloomberg

(Bloomberg) -- UK asset managers are losing more employees to tech companies as the industry struggles to embrace new technologies, according to a survey.

Over 70% of UK asset management executives saw a significant increase of employees leaving for technology firms in the past 12 months, according to consulting firm Accenture.

While asset managers have made commitments to staff in areas such as flexible working, there’s still a level of “cultural inertia” and “fear of failure” when it comes to embracing new technologies, said Chris Low, managing director at Accenture. He added that the “threat from innovative tech brands” will keep growing if the industry doesn’t tackle its own “cultural resistance.”

The study was based on a survey of 200 executives at asset management firms between April and May.