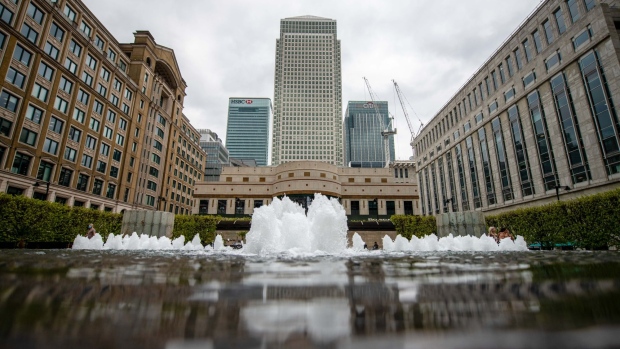 One Canada Square, center, is seen flanked by banking buildings at in the Canary Wharf financial, business and shopping district in London, U.K., on Wednesday, April 21, 2021. As Canary Wharf emerges from the pandemic, the financial hub’s stab at reinvention is accelerating. , Bloomberg

(Bloomberg) -- The UK government’s hints of aggressive tax cuts in recent weeks left the nation’s banks with some optimism they might be one of the big winners. Those hopes were dashed Friday.

Kwasi Kwarteng, the chancellor of the exchequer, handed over the most sweeping tax cuts since 1972, but stopped short of cutting the surcharge that City of London firms have been forced to pay in recent years.

In Liz Truss’s push to boost growth, banks had hoped -- and lobbied -- for Kwarteng to cancel previous chancellor Rishi Sunak’s plans to raise corporation tax from 19% to 25% but keep Sunak’s offsetting move to reduce the surcharge on bank profits to 3% from 8%. Instead, he scrapped both plans, leaving their tax rate at 27%.

That’s “markedly above the 19% rate other sectors will benefit from,” said Richard Milnes, UK Banking Partner at EY. Under Sunak, banks’ rate would have been 28%.

Jonathan Pierce, a banking analyst at Numis, said reducing the surcharge to bring their overall tax rate to 22% would have saved financial firms, and cost the government, about £1 billion ($1.1 billion) a year. By not doing that, “it further leaves the issue in limbo.”

Kwarteng said City firms are receiving other benefits, including the business-wide corporation tax cut and the scrapping of the the bonus cap. And many well-paid employees will also benefit from the removal of the highest rate of income tax.

Banks have been lobbying for the removal of the taxes on their sector as part of the push to boost London’s competitiveness compared to rival European centers. Executives also had hoped the government would consider reducing the levy on their balance sheets, which was introduced after the financial crisis. The levy has delivered almost £25 billion in tax since it was introduced in 2011 while the surcharge, from 2016, has generated just over £8 billion.

Kwarteng also announced in his mini-Budget Friday plans for “an ambitious package of regulatory reforms” later this year to boost the City of London. Those are expected to include measures to boost the competitiveness agenda across the government and regulators, rolling back the European Union’s Solvency II capital standard for insurers and deregulating capital markets.

Barney Reynolds, global head of the financial services industry group at law firm Shearman & Sterling, said the government should be able to achieve its aims before the next general election, scheduled for 2024. “They can do this within 18 months and probably much faster, reevaluating every rule and redrafting those which remain, if they orchestrate it properly,” Reynolds said.