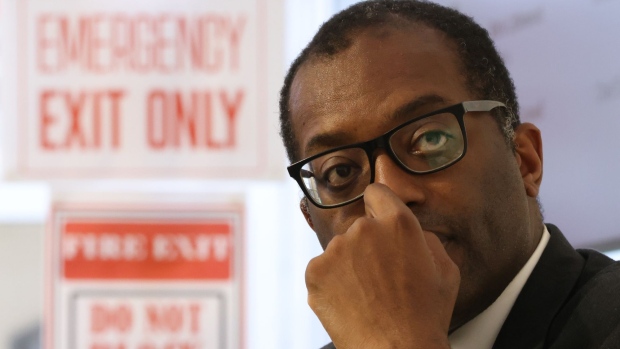 Kwasi Kwarteng, UK chancellor of the exchequer, speaks at a fringe event during the Conservative Party's annual autumn conference in Birmingham, UK, on Tuesday, Oct. 4, 2022. Liz Truss will struggle to drive through key parts of the economic revolution shes planning for the UK because her standing in the ruling party is already so damaged, members of her Cabinet said. , Bloomberg

(Bloomberg) -- Chancellor of the Exchequer Kwasi Kwarteng discussed ways to ease the cost-of-living crisis, including giving more time for energy and council tax payments, with the bosses of UK banks on Thursday.

They also talked about the soaring cost of home loans in the wake of Kwarteng’s budget announcement last month. Some of the bankers highlighted stress among customers with buy-to-let and interest-only mortgages, according to people familiar with the matter.

The bosses of banks including mortgage giants NatWest Group Plc and Lloyds Banking Group Plc attended, according to a Twitter post by the Treasury. Smaller lenders including Starling Bank also came to the meeting, which was part of a series of gatherings with the new chancellor and the financial services sector.

The meeting came after banks pulled more than 40% of mortgage products from the market following the chancellor’s so-called mini-budget on Sept. 23. Since then, the cost of a five-year mortgage has breached 6% for the first time in more than a decade, while the two-year rate is at its highest in almost 14 years.

Mortgage rates at 6% will cost the holder of a two-year fixed mortgage about £10,000 ($11,264) more over the period compared with the same type of home loan taken out last December when rates were about 2.34%, according to data compiled by Moneyfacts Group Plc. That’s based on a mortgage of £200,000 borrowed for 25 years.

Attendees discussed measures to restore stability to the market including extending the Mortgage Guarantee Scheme, according to the people, who asked not to be named discussing non-public details. The government-based program to help first-time buyers was introduced in April 2021 as a Covid-19 support measure and is due to expire at the end of the year.

The chancellor also asked for ideas for his Big Bang 2 deregulation package to boost the City of London. Bankers raised the prospect of scaling back the ring fence between their retail lending and investment banking operations, according to two people. The ring-fence rules were put in place after the financial crisis to try and avoid taxpayer bailouts of retail banks.

Banking bosses also issued a warning about the consumer duty proposed by the Financial Conduct Authority to ensure firms treat customers fairly. On both issues, banks are interested in targeted changes rather than radical alternations, the people said.

The issue of loss-absorbing capital was also raised. Smaller banks have been calling for a relaxing of so-called MREL levels to bring the UK more into line with the US and EU. They argue the change would free up billions of pounds that could be lent to customers. Regulators oppose a shift, but the current government could look at the topic as part of its reforms.

The Treasury declined to comment on the details of the meeting.