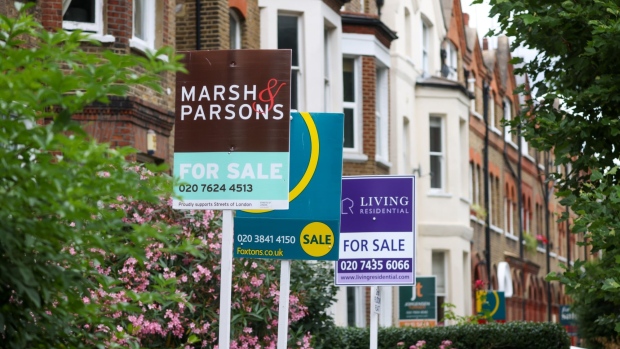 Estate agent "For Sale" signs outside residential properties in the Queen's Park district of London, UK, on Thursday, June 30, 2022. UK house prices slowed more than expected this month after a series of interest-rate increases raised the cost of mortgages. Photographer: Hollie Adams/Bloomberg , Bloomberg

(Bloomberg) -- Britain’s biggest mortgage lenders will urge Chancellor Kwasi Kwarteng to extend a program which helps first-time buyers purchase a property at a meeting Thursday, Sky News said, without saying how it obtained the information.

The Mortgage Guarantee Scheme, launched by the government in April 2021, is set to expire at the end of this year. The program has allowed lenders to lean on the government for compensation if they incur losses on mortgages above 80% of the purchase price of a property.

Kwarteng is meeting with executives from lenders including Barclays Plc and NatWest Group Plc on Thursday in the wake of banks pulling more than 40% of mortgage products from the market following the chancellor’s so-called mini-budget on Sept. 23. Since then, the cost of a five-year mortgage has breached 6% for the first time in more than a decade, while the two-year rate is at its highest in almost 14 years.

The Mortgage Guarantee Scheme hints at the agenda of lenders as they seek to join forces with the Treasury to tackle the turmoil flooding the housing markets. The initiative incentivized banks to offer more 95% mortgages at better rates, in a move that then Prime Minister Boris Johnson described as a tool to turn “generation rent into generation buy.”