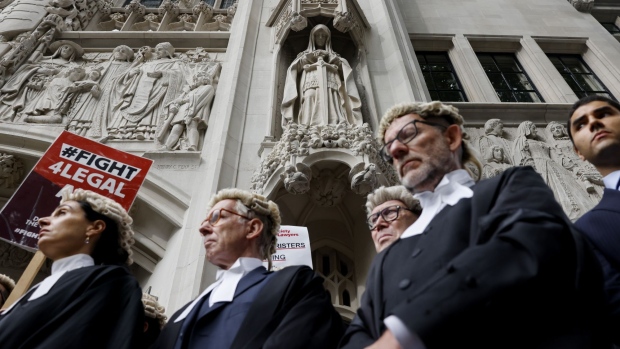 Criminal lawyers protest during their indefinite strike near an ornamental statues at the Supreme Court in central London, UK, on Tuesday, Sept. 6, 2022. Most of the UK's criminal trial lawyers started an indefinite strike on Monday, escalating a protest with the government over funding and fees and bringing the country’s crumbling justice system to a standstill. , Bloomberg

Britain’s criminal trial lawyers will vote on whether to end their indefinite strike action after a fresh offer from the government to boost fees and investment in the profession.

The deal represents a further investment of £54 million ($58.6 million) that’ll see a 15% rise in fees for most current and future criminal cases, according to the Ministry of Justice. The package will also help to reduce the record breaking court backlog.

The Criminal Bar Association, which represents thousands of barristers in England and Wales, said Thursday it will ballot its members on the proposals.

“The details are being discussed with our members,” a spokesman for the CBA said. “It is not a good start that the Lord Chancellor has insisted on going ahead with a premature press release.”

The potential deal comes almost a month after barristers walked out indefinitely, escalating demands that the government improve its original offer. Britain’s justice system has been thrown into chaos in recent years with chronic underfunding, a backlog of cases and junior lawyers who earn well below the minimum wage.

“My priority in these discussions has been to ensure that victims aren’t forced to wait longer to see justice done,”  Justice Secretary Brandon Lewis said. “These are generous proposals, and I would strongly urge all members of the CBA to consider carefully, end their strike and work with me to deliver better outcomes for victims of crime.”