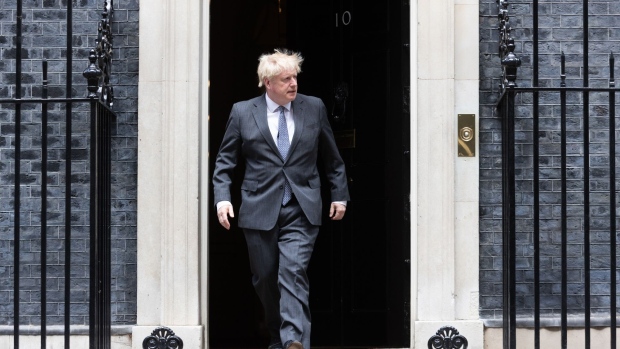 Boris Johnson, UK prime minister, prepares to meet Antonio Costa, Portugal's prime minister, ahead of their bilateral meeting at 10 Downing Street in London, UK, on Monday, June 13, 2022. Johnson risks reopening divisions that tore his Conservative Party apart in 2019, with his government set to propose a law that would let UK ministers override parts of the Brexit deal he signed with the European Union. Photographer: Chris Ratcliffe/Bloomberg , Bloomberg

(Bloomberg) -- The UK began a formal inquiry into how Boris Johnson’s government responded to the coronavirus pandemic, more than two years after the country first entered lockdown.

The British prime minister announced the start of the probe in a written statement to Parliament on Tuesday. It’s a moment that families of Covid-19 victims have been pushing for, arguing that the early months of the pandemic response were mishandled.

While ministers have tried to shift the narrative to the vaccine roll-out that enabled the lifting of restrictions, the government at various stages faced intense criticism for its handling of the pandemic, including over the lack of protective gear for health care workers, a shortage of tests and the perceived delay in trying to halt the virus’s spread.

The UK has recorded almost 180,000 deaths within 28 days of a positive test, according to the latest data.