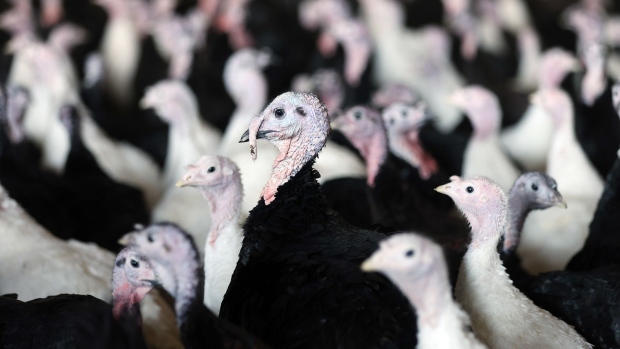 CHESHIRE - NOVEMBER 04: Turkeys run free in a barn area on November 04, 2022 in Cheshire, United Kingdom. Due to the largest outbreak of Avian Flu in the UK, bird keepers will be required to keep their livestock inside to minimise the risk of transmission from the wild bird population. The UK produces between 9-10 million birds to be consumed at Christmas and there are fears that the situation will lead to a shortage this year. (Photo by Nathan Stirk/Getty Images) , Photographer: Nathan Stirk/Getty Images

(Bloomberg) -- A record bird flu outbreak in the UK has resulted in culling of almost half of the nation’s free-range turkeys for Christmas, according to the poultry industry group.

About 600,000 free-range birds have been culled or died as a result of the virus, out of 1.2 million to 1.3 million birds produced specifically for Christmas, said Richard Griffiths, chief executive officer of the British Poultry Council, at a parliamentary committee hearing on Tuesday.

In total, some 1.6 million birds have been culled directly because of the virus as of Nov. 20, while about 36% of poultry farms in the country are covered by some form of control, he added.

“It’s huge and the costs for industry and food production are potentially enormous,” Griffiths said. “For next Christmas and subsequent Christmases I fear for the free range production as a whole.”